A singer-songwriter from Co. Cork was certainly on song last Saturday as he won a €31,000 Winning Streak bonus when he appeared on the National Lottery TV game show on 22nd February. 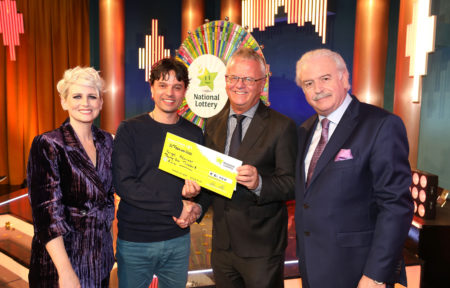 Fergal O’Connor from Mallow, Co. Cork, but now living in Youghal was thrilled with his haul of €31,000 in cash. He spoke of how he got on the RTÉ One programme and said he was jamming at home with his friend, Darragh on piano and Fergal on guitar, when they were interrupted by a call to Fergal’s phone. It was Fergal’s mum who told him that his name came out of the drum for the next Winning Streak show.

Fergal was bemused by this as he never sent in a ticket. However, his dad Richard, who recently celebrated his 80th birthday, got a few Winning Streak scratch cards. Fergal’s mum, Peggy wrote out his name on one of them, and this is the one that landed him on the show.

It has been a good year for Fergal who got engaged last April to Eilís. The couple are in saving mode both for a new home and a wedding, which they want to host in their future home, so his Winning Streak luck could not have come at a better time.

The couple’s dream is to buy land out in the Cork countryside and build their own home, so this handsome win will go a long way for them. They love the peace and tranquillity that living in the country brings. They recently opened their own business – Seed and Blossoms Wellness Centre in Youghal which provides the community with a range of yoga, pilates and relaxation workshops and holistic therapies which aim to relieve the stresses and strains of modern life. Eilis is a yoga teacher and physiotherapist by trade and they are really enjoying the venture.

They also like taking long walks in the forests of Youghal with their beloved dog Baloo (a golden poodle) and both like to relax by doing a spot of gardening and even grow their own herbs.

Eilis was in the audience cheering Fergal on last weekend along with Fergal’s mum Peggy and his siblings Adrian and Gillian and their respective families as well as some of Fergal’s friends. Fergal’s dad Richard watched on from hospital as he isn’t feeling great at the moment.

Describing his music as “easy-listening, Fergal is a singer-songwriter who is in writing mode for his new album where he is collaborating with a number of artists including Marketa Irglova, who won the Oscar for Best Song alongside Glen Hansard for the movie Once, which both starred in. Both were introduced in Reykjavik, Iceland and hit it off so are working together on a couple of songs. Fergal’s first album “Light Breaks Through” is available to stream on Spotify and Apple Music.

As if he isn’t busy enough Fegal also likes to run. He ran his first marathon last year and is in training for the Cork Marathon this summer. He is also interested in the Japanese concept of forest bathing, which involves going into the countryside and forests with the aim of connecting with nature and surrounding yourself with the energy of the natural world.

The Winning Streak National Lottery TV game show is co-presented by Marty Whelan and Sinead Kennedy and features some perennial favourite games including Play or Pay, Roll for Riches, WinFall and Electric Dream – where one player will win an electric car worth €25,000.

As ever one of the lucky five players will get the chance to spin the wheel and win up to €500,000. An exciting element of the show is that one €100,000 segment will be added to the Grand Prize Wheel every show if less than that amount was won in the previous show, improving players chances to win a massive prize.