Nature Inspired Sculptures in Midleton Lodge Park cause quite a Buzz

Midleton’s Lodge Park is now home to a fairy dwelling and a collection of woodland creatures, inspired by nature, carved by artist Will Fogarty, Fear na Coillte and commissioned by Cork County Council.

From the delightfully surprising blooming of hundreds of rare bee orchids, a result of a reduced mowing regime along the Northern Relief Road, to becoming Ireland’s first ‘Pollinator Town’, to the recent appearance of magical sculptures from storm damaged trees in the Lodge Park, Midleton has been making headlines for all the right reasons.

It all comes down to the Midleton Pollinator Plan, championed by Cork County Council’s East Cork Municipal District (MD). In 2019, a wildflower meadow was developed in the Council owned grounds of historic Midleton Lodge. After a very successful first year in recovering the seed bank and the flourishing numbers of bird and insect visitors, the East Cork MD prepared a Pollinator Plan. 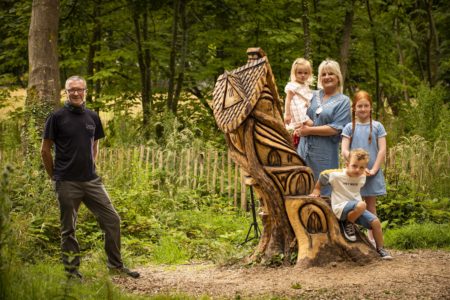 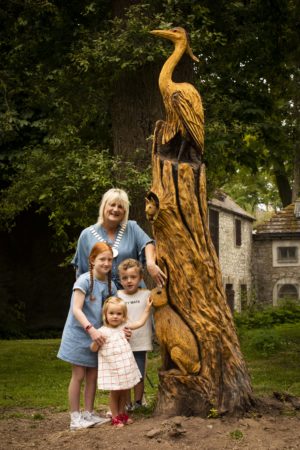 Mayor of the County of Cork, Cllr Mary Linehan Foley, expressed her delight at the new additions to the Lodge Park, saying, “Midleton is renowned for its public sculptures. The best known is the “Kindred Spirits” monument celebrating the Choctaw gift to the Irish during the Famine. The Pollinator Plan is a remarkable success and these charming, wooden creatures marry this tradition of sculpture to the Pollinator Plan in a perfect partnership. Under the Council’s Project ACT, measures to support businesses, retailers and communities are being delivered across the county. This defines Project ACT, a public park with lots of safe open space and now some superb sculptures which I can confirm are a huge hit with children.”

Chief Executive of Cork County Council, Tim Lucey, praised the pilot project in Midleton saying, “Midleton Lodge Park is a wonderful amenity in the centre of the town and the addition of these sculptures with the roll out of the Pollinator Plan has seen a substantial increase in visitor numbers to the park. A consultant arboriculturist advised on best management of trees and replanting suitable to the park and this report informs the Midleton Pollinator Plan. During the removal of storm damaged trees, our East Cork Municipal District commissioned the artist to repurpose the remains into these works of art.”

Of the four captivating tree sculptures in Midleton Lodge Park, one is a pair of barn owls perched on a double tree trunk, another is a fairy house in the woods, a third is an elegant heron with a hare underneath and a cheeky little squirrel peeking out from a hole in the tree trunk, and the fourth is a bee on a flower head with a honeycomb motif, as well as two low seats for children.