They were 1.5 miles from shore in a supermarket inflatable boat, having lost their paddles…

Aengus O’Donovan, a former Crosshaven RNLI crew member was returning to Crosshaven in his trawler, the 10m Majestic IV this afternoon when he spotted two young men in a supermarket inflatable boat/toy with no lifejackets approximately 1 mile south of the Daunt Rock buoy and about 1.5 miles from the shore having lost one of their paddles and the inflatable somewhat swamped. The wind was blowing offshore.

Aengus and his crewmate, Mathew Byrne, retrieved the two hypothermic casualties to his boat, wrapped them up in the wheelhouse and made for Crosshaven RNLI station where our Deputy LMA Dr Larrie Martin and three of Crosshaven RNLI’s first responders, Alan Venner, Georgia Keating and Jenna O’Shea took control and treated the two men in the station. Advice was given that they should get checked out at hospital. They declined, and the station arranged a taxi for them after they had been warmed up sufficiently to leave unaided.

The inflatable was destroyed at the station.

Commenting on the incident, Hugh Mockler, Deputy Launch Authority said “ These supermarket inflatables have no place on the sea as they are downright dangerous. If these men had not been spotted by Aengus they may never have been found and become another avoidable tragedy for two families.” Hugh also praised Aengus for his seamanship and first Aid skills in bringing the two men back to shore safely. 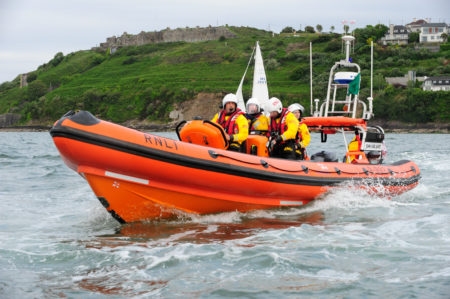 File photo of Crosshaven’s RNLI Rib. It wasn’t involved in today’s rescue because as luck would have it Aengus O’Donovan, a former Crosshaven RNLI crew memberm was on his own trawler, when he spotted two young men adrift.