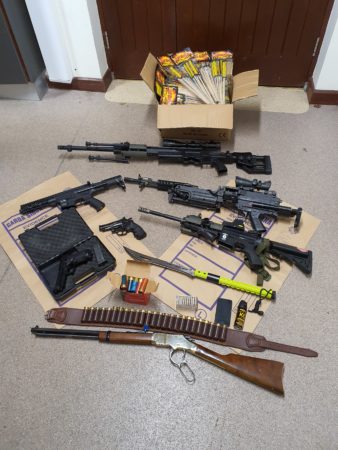 Gardaí from the Mallow District Drugs Unit, assisted by Gardaí from Mallow and the Southern Region Dog Unit executed two search warrants at houses in Mallow town. During the course of the first search Gardaí seized 490 fireworks, an airsoft replica handgun, pepper spray, a tazer disguised as a mobile phone and a machete. Gardaí also seized small quantities of suspected cocaine, cannabis herb and diazepam along with weighing scales and €400 in cash.

During the second search Gardaí seized a legally held rifle, ammunition and five airsoft replica firearms, some of which are believed to be over the legal limit of 1 joule. Gardaí also seized a small quantity of cannabis herb and €1750 in cash.

All of the seized firearms will be sent for ballistic examination and the suspected drugs will be sent to Forensic Science Ireland for analysis.

No arrests have been made but Gardaí are following a definite line of enquiry.