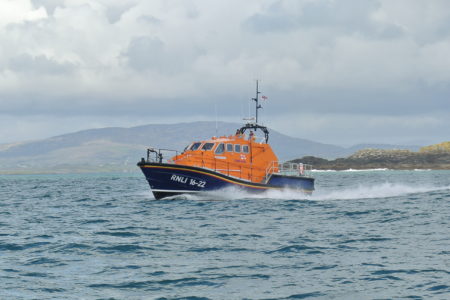 Baltimore RNLI were called out twice in 14 hours to provide two separate medical evacuations from Cape Clear Island off the coast of Baltimore, West Cork.

The first call out happened yesterday evening (Saturday 19 September). The volunteer lifeboat crew launched their all-weather lifeboat at 6.49pm, following a request from the Irish Coast Guard to provide a medical evacuation (Medivac) to an islander from Cape Clear.

The second call out came earlier this morning (Sunday 20 September) when at the request of the Irish Coast Guard the volunteer lifeboat crew launched their all-weather lifeboat at 8.24am, to provide another Medivac to an islander from Cape Clear.

The Baltimore all-weather lifeboat crew arrived at the island at 8.47am and transported the casualty back to Baltimore, departing Cape Clear at 8.57am and arriving back at the Lifeboat Station at 9.26am. The casualty was handed over to the care of the HSE ambulance crew.

On this morning’s call out were five volunteer crew, Coxswain Kieran Cotter, Mechanic Sean McCarthy and crew members Micheal Cottrell, David Ryan and Don O’Donovan. Conditions at sea during both call outs were calm with a north easterly wind and no sea swell.

Speaking following the call out, Kate Callanan, Baltimore RNLI Volunteer Lifeboat Press Officer said: ‘Baltimore RNLI often provides medical evacuations for residents or visitors to the islands around west Cork including Cape Clear, Sherkin and Heir Islands. If you find yourself in need of medical assistance whilst on an island, call 999 or 112.’

AREA: WEST CORK, NEWS
€20,000 for Streetscape Improvements in Passage West and Carrigaline
Previous Post
Taoiseach 3/1 from 7/1 to be Replaced as FF Leader by End of 2020