Palestinian family named as ‘Cork Persons of the Month’ 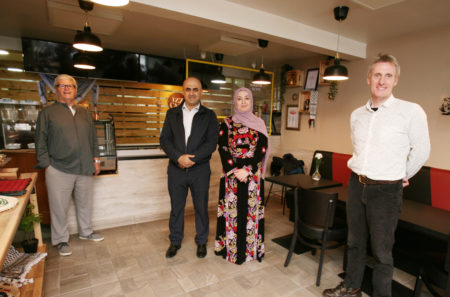 Izzeddeen and wife Eman Alkarajeh overcame the odds of moving to a new country, a new city, learning a new language and spending time in Direct Provision to build a very successful new life and business. Their food and restaurant business are now being celebrated by Cork’s top foodies and by national food critics, for their traditional Palestinian cuisine.

From Palestine, Izz moved to Saudi Arabia in 1999 to find work after he graduated from university with a degree in Computer Science. Here he met his wife Eman, originally from Jordan. In 2005, the couple applied to return to Palestine with their family. But because Eman did not have civilian status in Palestine, and as Izz’ contract in Saudi Arabia was coming to an end, this put enormous pressure on the couple to find somewhere where their family could live together. Originally, the couple applied for skilled immigration to Canada, but the age requirements were changed before they had received their visas.

As time was running out, the couple were afraid that they may have to return to their native countries, breaking up their family unit. It was at this point that Izz and Eman came to Ireland and applied for asylum, which took a year to be granted. They spent this year in Direct Provision centres in Dublin and Cork.

While still in Direct Provision, Izz completed a ‘start-your-own-business’ course through SECAD. Although he had experience working in the IT sector, from the positive reaction they received whenever they shared their cooking with their new friends in Ireland, Izz felt that there was an appetite for Palestinian food in Cork. Eman trained as an interior designer in Jordan, but has been cooking traditional food since childhood, which encouraged the couple to give their idea a try. At that stage, one of their new friends put them in contact with Darina Allen, who they felt would be able to provide advice about setting up a food business in Cork. Darina encouraged the couple to embark on their venture and put them in contact with her son-in-law Rupert Hugh-Jones, who runs farmers markets around Cork.

On their first day at Mahon Point Farmers’ Market, Izz and Eman sold out their entire stock in two hours. Their continued success at farmers’ markets led to their decision to open Izz Café, serving the people of Cork with quality, traditional Palestinian food. Speaking about their success, Izz said, “Cork has proved itself a city of sanctuary, a place of welcome and safety for people of migrant origin like ourselves. Being in Direct Provision was challenging for our family, but we are happy to have met some amazing people who have made Izz Café possible.” Eman added, “The people of Cork have accepted us with open arms and we are so thankful for their continued support.”

As a way of saying thanks to their new community, they have supplied free meals recently to Health Care workers during the COVID-19 crisis, from their Izz Cafe on Georges Quay, in Cork’s city centre.

Organiser of the awards Manus O’Callaghan said “Cork has always celebrated diversity in people so it’s not surprising to see our City give people like Izz and Eman and their four children a fresh start, just like many Corkonians got in cities around the world in the past. Izz and Eman have an inspiring story of coming to Ireland as asylum seekers and making Cork their home. Their hard work and commitment to introducing the people of Cork to their traditional cuisine and culture is reflected in the popularity of Izz Café. We wish them continued success for the future.”