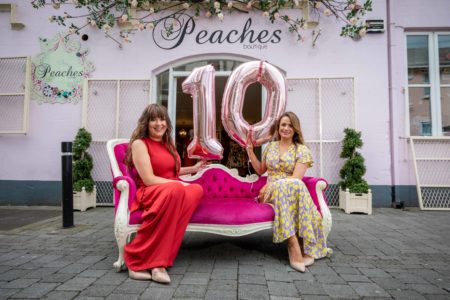 Best pals since their days at Loreto school in Fermoy, Co Cork and business partners after, Andrea Lyons and Siobhan Forrest, are celebrating 10 years in business and in spite of COVID and an annus horribilis on the personal front, they’re still standing, still smiling and eager to drive on for the next decade.

Their independent retail outlet, Peaches Boutique on Kilkenny City’s close-knit Kieran Street, has never been busier and with help from their Local Enterprise Office, the gutsy fashionistas are also starting to trade online.

The stylish duo say much of their success is down to the phenomenal local support they receive in their native counties and from savvy shoppers and visitors to the medieval city, many of whom have been constant return customers since the ladies first opened their doors on November 5, 2010.

To celebrate their landmark anniversary, Andrea, from Ballyporeen in Tipperary and Siobhan from Castlelyons in Cork are launching their new website, wwww.peachesboutique.ie and will be selling online for the first time. They also plan online and in-store discounts as part of the 10th Anniversary celebrations with 20% off in-store on October 2 and 3.

“We are incredibly thankful to the Kilkenny and visiting public for their continued support,” Andrea said. “It’s so rewarding to see returning customers as we prepare to celebrate our landmark anniversary. We set up at the start of the last recession and while the pandemic has been a set-back, we’ve changed our buying strategy and are stocking more casual chic styles rather than formal wear. Unfortunately there just aren’t as many formal events for people to attend in the current climate. We’ve also invested in a whole new series of brands,” Andrea explained.

It’s been an exceptionally busy year for the bubbly business partners. Andrea was still on maternity leave having had her second child when Siobhan had a premature baby in July with little Ruby born at 27 weeks and weighing in at just 2lbs. Thankfully, she’s thriving now.

“I was in hospital for four weeks before Ruby was born so it was pretty hectic. My mother passed away six weeks later. It was a horrible time. But we managed it all and we are looking forward with renewed optimism to a great finish to 2020.

“Kilkenny people are amazing. We’ve a huge amount of Cork and Tipperary support too. Our customers really understand the value of shopping local and keeping business in the city and the county. I really don’t think our business would have survived if we were based anywhere else.

“Visitor numbers to Kilkenny are well down and we don’t have the usual lift from hens and weekend visitors anymore. Our loyal customer base have kept supporting us, have kept coming in, have kept buying. We are incredibly thankful to them and to visitors to the City who pop in whenever they’re around and want to reward them as we celebrate our 10th birthday. Restrictions mean we can’t have the celebrations we planned but there will be plenty of rewards and socially distant fun to be had,” Siobhan promised.

Asked if they ever get tired of working together or ever thought of packing it in when times get tough, Andrea quipped: “I get to work with my best friend every single day and to meet the most amazing, fashionable and stylish ladies.

“We have a fantastic decade and we’re thrilled to be celebrating ten years of positivity and fun. We set up in a recession so what’s another one eh? We have a positive outlook. Even with everything that has happened over the past year, we have never, ever considered giving up. We love it too much.”

Peaches Boutique is one of a growing number of businesses in Kilkenny which has been supported by Kilkenny Local Enterprise Office and availed of grant aid under the special COVID fund. Siobhan and Andrea have generated lots of business through their social media channels but with financial backing from LEO, they’ve been able to get the new website up and running and trade online.

“But we still look forward to the personal interactions, to customers dropping in and to another fun-filled decade on Kieran Street,” Andrea concluded.