THINGS TO DO IN CORK: IndieCork Film Festival begins today with Premier of Damian McCarthy’s Caveat

The IndieCork Festival starts today with the World Premier of ‘Caveat’.

IndieCork returns for its eight year as it once again focuses on showcasing independent filmmakers – from handpicked arthouse titles, to the outer reaches of the indie world.

Reflecting the global predicament we live in now, one of the more pertinent programmes of the festival this year includes International short films looking at life (and often made) during lockdown. With creativity and cinematic cleverness the filmmakers transcend the limitations of social distancing and other COVID restrictions. The shorts include drama, comedy, horror, documentary, imaginative and revelatory films about what life was and is like in such times.

This year’s festival will take place both in The Gate Cinema and crucially, an exciting new venture – IndieCork Online. Most films will be available to view at the new portal October 4th to 18th.

IndieCork has always championed the independent, the innovative and the emerging filmmakers and music-maker and this year sees several key talents participate at the festival.  The main festival sponsor is Blacknight Solutions, the Carlow-based web hosting company, who enter their fifth year of sponsoring IndieCork and who are particularly supporting the online venture.

“We are delighted to be celebrating eight years of the festival this year especially with such a strong programme of feature films, shorts and documentaries. This is in addition to our music programme which is really strong this year under the current circumstances.  A founding purpose of IndieCork is to serve as a platform for emerging filmmakers – we look forward, particularly in this challenging year, to giving people something to enjoy, whether in person or online. This year we felt the festival required an online presence to guarantee delivery and give additional opportunities for people to participate and enjoy. We are truly grateful that once again Blacknight is supporting IndieCork and in this very crucial way, enabling our festival provide new opportunities for filmmakers and film fans.”

The Opening Night film is the feature debut  ‘Caveat’ by Damian McCarthy, who studied at St. Johns College. Damian is an electrician originally from Bantry in West Cork. He said he called in many favours from family and friends to make the film. Caveat features a host of Cork filmmaking talent, both in front of and behind the camera, while remaining a very international production. The film is set on a remote island and much of the shooting took place around County Cork. 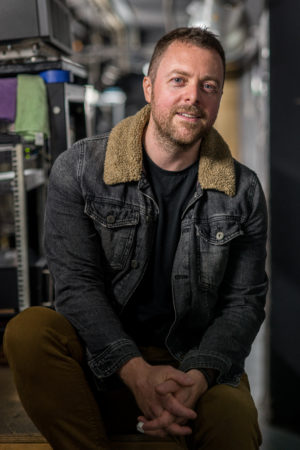 The Closing Night Film has another great Cork connection –  ‘Breaking Out’ which tells the story of Fergus O’Farrell, who was the charismatic voice of Interference, one of the most compelling and influential bands to emerge from the Irish music scene in the 1990’s. He was best known for his timeless song Gold which featured in the soundtrack to Once, the Oscar-winning film and multi-Tony-award-winning musical. Fergus of course, is a great hero of the Cork music scene.

“It’s a difficult year for everyone, and for filmmakers also, sending their films out without the joy of meeting their audiences. Many of them will miss that important connection. But we hope that through our new online platform, we can makes these connections – hosting live Q & A’s, interviews and other events. We have such terrific, unusual and beautiful films at the festival this year – we’re hoping people can see as much as possible. From the amazing talent of Eliza Hittman, we’re so looking forward to people seeing her Berlin Silver Bear winner ’Sometimes Always Rarely Never’ to Canada’s Mike Hoolbooms’ newest documentary ‘Judy Vs. Captalism’ there is a wealth on offer here and we feel quite privileged this year to be showcasing these films’3.

Partnerships are an important part of the festival, and IndieCork will present art(IST)film, in collaboration with CIT and Crawford College of Art and Design. Essentially, it is a National Graduate film competition for artists working in the medium of film and the second year of the collaboration.

Achieving recognition as the festival for independent Irish and international film in Ireland, IndieCork has a wide and rich programme on offer. The eight IndieCork Festival drew entries from all over the world this year reflecting the depth of filmmaking talent in Ireland and the international standing of the festival.

IndieCork is the largest festival for short films in Ireland. As part of the festival, there will be 12 programmes of new Irish short films, including three programmes of shorts competing for the Best Emerging Irish Female Director award.

When it comes to supporting the music community, IndieCork has come up with two novel enterprises.

IndieCork will launch a new CD album ‘Still, Life’ which showcases new music coming from the region. The festival has also entered into a partnership with London based radio station Resonance FM, the sound art broadcaster, which will see them broadcast live sessions with performers from Cork. These sessions will also feature on Dublin Digital Radio and on Lyric FM. Music Programmer, Tony Langlois commented: It’s hard to think of an industry more affected by Covid 19 than live musical performance. No venues, no festivals, no audiences. But naturally the musicians of Cork have not been idle, and this album showcases just some of the composition and recording that has taken place over the last few months. In keeping with IndieCork’s our annual IndieCork Tank nights, this collection of recent work leans towards the experimental and off-beat sounds that Cork has a proud tradition of nurturing.”