A Government office in every town in Ireland: That’s what a Post Office COULD

Cork East TD Seán Sherlock has said that politicians of all parties need to move beyond the platitudes of post office and meet the funding shortfall in the sector to prevent unrestrained closures in the Post Office network.

According to the Grant Thornton Report commissioned by the Irish Postmasters Union the post office network consisting of 899 post offices as operated by independent contractors, serving local communities across Ireland faces significant levels of unrestrained closures by the end of 2021, without government intervention.

“We all stand up in the Dáil, and we speak about the importance of postal services in this country and there’s a certain amount of platitudes given to the issue. But at the end of the day, as the report highlights that the cost of operating the post office network is 17 million, the revenue generated by the retail element of the post office network associated with postmasters is 53 million, and therefore the funding shortfall. That needs to be met to prevent on restrained closures of post offices is 17 million.”

“So what do we do? What does government do to bridge that gap? The report is very good at identifying the strengths and how can we build the business base and expand the business model, to the extent that gives post offices are fighting chance whether you’re in a rural setting, or whether you’re in a city like Cork, or Galway or Limerick or wherever it is, because they each face the same types of challenges.”

“It is important that we as consumers make conscious decisions about using post offices. The volume of customers is an issue and that’s obviously with the demise of letter posting that that’s having a knock on effect. The growth of the Parcel Service you could argue will only be for a relatively short period of time, because companies like Amazon as we know are building their own parallel networks and I wonder about the contract and the sustainability of that contract with An Post in the medium or long term. So we need to move beyond platitudes with an ethical base, if you will, where the ethos is based on the need to ensure that post offices are still planted firmly and can be sustainable, into the future.” 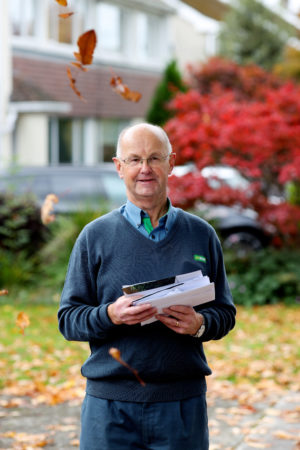 Pic shows Dublin Postman, Vincent Frawley who delivers in the Stillorgan area. The Postman (or lady) is a feature of daily life we can often take for granted. An Post are a massive organisation with branches in almost every town and village across Ireland.
PIC: MAXWELLS

Deputy Sherlock highlighted the absence of a PSO in the sector.

“If this report is given a fighting chance, then the imbalance on those figures can be addressed. The pso is one of the proposals in that, and I think that that should be seriously considered by government.”

“If you look at countries with approval from the European Commission to operate a PSO for Post Office network they include the United Kingdom, now recently departed, but it’s a significant country with a PSO in relation to post office, the post office network and I think that’s worth noting, France, Italy, Germany, Poland Finland and Spain. We don’t have one. I think it should be considered. But, interestingly, the report also highlights that other industries currently or previously receiving a PSO in Ireland include agriculture, aviation rail, finance, radio, housing and energy. I think that’s particularly significant. So if we can move beyond the platitudes the rhetoric, embrace the report and think differently about what a PSO would look like I think there’s opportunity there to build a sustainable future for the post office networks.”

Deputy Sherlock also raised the issue of rural development linked with the survival of the post office network.

“I think it’s worth highlighting the report from the Irish local development network in its response to the budget 2020, where it has said that there were three core concerns that they had that no funding has been provided for new leader projects in 2021, no funding has been identified for the delivery and administration of lead of the leader program 2021, and no interim National Rural Development Plan has been announced for the period 2021 to 2023 as committed to in the programme for government.”