Paul Sheridan, founder of Tour de Munster has been named as Novembers Cork Person of the Month. An avid cyclist himself, Paul’s work to raise funds for the Munster branches of Down Syndrome Ireland (as well as others) have helped the lives of countless Cork families. 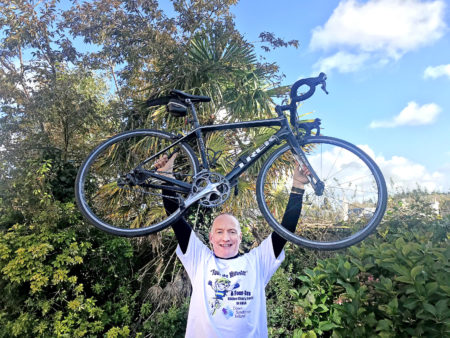 Paul Sheridan has spent the last 20 years fundraising for Down Syndrome and others through his Tour de Munster cycling group. Pic. Rachael Sheridan.

Every year, Paul works tirelessly to organise the Tour de Munster, putting in hours of training to make sure that himself and all of the other cyclists are able for the cycle ahead. The group of cyclists is made up of both keen fans of the sport, as well as amateur enthusiasts who are committed to fundraising for the cause. Paul leads the group each year, encouraging them and ensuring that everyone is ready for the gruelling four days of The Tour.

Like many other organisations, the Munster branches of Down Syndrome Ireland were negatively impacted by the COVID-19 pandemic as many fundraising events had been cancelled. This made this year’s event even more important. Regular participant and cycling legend Seán Kelly once again took part, showing his support for the cause.

Speaking on his success Paul Sheridan said, “Fundraising for children in need is more important than it has been since the first charity cycle back in 2001. It’s evident how extremely difficult COVID-19 has been for those with Down Syndrome, and for the six branches of DSI across Munster. We want to do as much as possible to raise funds and awareness, so I would encourage anyone who would like to get involved next year to take part.”

Awards Organiser Manus O’Callaghan said, “It’s people like Paul Sheridan that give Cork its good name. His selflessness and dedication to help the Munster branches of DSI, and children in need, is truly admirable.”