Ambassador Power’s mother is a UCC alumna, with UCC conferring an honorary doctorate on Ambassador Power in 2008.
The Government and Politics Society of UCC organised an interview for UCC staff and students last night with former US Ambassador to the United Nations, Samantha Power, who is nominated to become Administrator of the United States Agency for International Development (USAID) in President Biden’s administration. 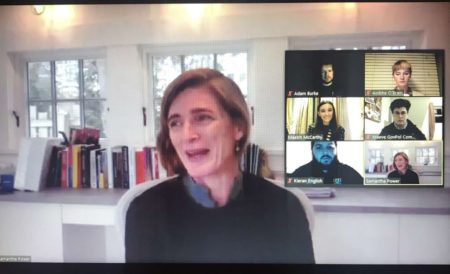 Ambassador Samantha Power has strong links to UCC and Ireland, having emigrated aged nine from Dublin. Ambassador Power’s mother is a UCC alumna, with UCC conferring an honorary doctorate on Ambassador Power in 2008.

Ambassador Power spoke about themes from her memoir The Education of an Idealist, how she is looking forward to joining the Biden Administration if she is confirmed by the US Senate, and her wish to resume visits to her native Ireland to see family and friends once international travel can safely resume.

This student organised event, which ran for an hour via Zoom last night, saw great interaction between UCC Students and the Ambassador. The event was organised and ran by the Government and Politics Society, a politically neutral student-led society within the University, who aim to educate, inspire and engage students in politics and active citizenship. Members of the Government and Politics Society submitted questions for the Ambassador prior to the event, and were hugely impressed with Ambassador Power’s honesty, integrity and her advice to students considering embarking on a career in public service.

Chairperson of the Government and Politics Society, Maebh McCarthy, described the experience of interviewing Ambassador Power as “surreal and inspirational.” Ms. McCarthy went on to describe the challenges that Covid-19 has posed to the society but also the opportunities that have arisen as a result of operating in a solely virtual sphere. “All 109 societies in UCC have had to adapt to hosting events virtually, which has proved challenging, but I believe we have really risen to the challenge. I would actually contend that it has also offered some amazing opportunities. If we were operating as normal, we would never have had the opportunity to interview Ambassador Power.”