The volunteer lifeboat crew launched their all-weather lifeboat at 6.16am, following a request from the Irish Coast Guard to go to the assistance of a 50 foot converted trawler, with two people on board, which had run aground in the Ilen River, near Old Court in West Cork. 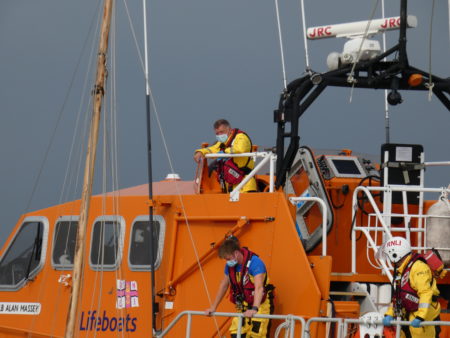 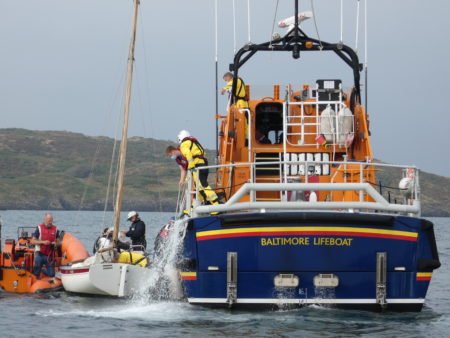 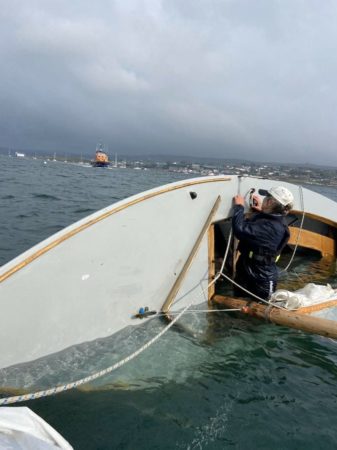 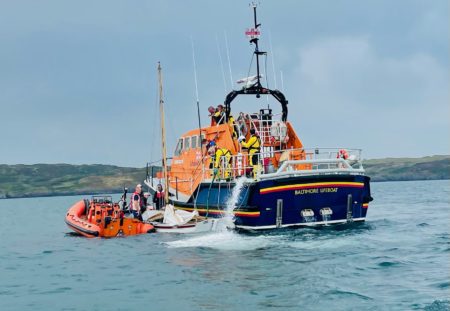 The Baltimore all-weather lifeboat crew arrived at the casualty vessel at 6.45am and Coxswain Aidan Bushe immediately assessed the situation. There was no obvious damage done to the trawler and given the fact the tide was falling and she was hard aground, the decision was made not to attempt to refloat her. Baltimore Lifeboat volunteer crew members launched their y-boat and crew members Jerry Smith and Colin Whooley made their way over to the casualty vessel and took two people off the vessel and brought them back to the lifeboat. The lifeboat crew then retrieved the y-boat and the lifeboat made its way back to Baltimore, dropping the two people at the pier before returning to Baltimore lifeboat station at 8.07am.

At high tide this afternoon the skipper of the casualty vessel managed to refloat the vessel without any further assistance from Baltimore RNLI.

There were six volunteer crew onboard the lifeboat this morning, Coxswain Aidan Bushe, Mechanic Cathal Cottrell and crew members Sean McCarthy, Don O’Donovan, Jerry Smith and Colin Whooley. Conditions during the call were calm with a north easterly force 2-3 wind, no sea swell and good visibility.

The volunteer lifeboat crew were also called to launch their all-weather lifeboat at approximately 4.18pm, following a request from the Irish Coast Guard to go to the immediate assistance of an 18ft sailing sloop, with three people on board, which was sinking in Baltimore Harbour.

When Baltimore all-weather lifeboat crew arrived at the casualty vessel at 4.24pm the three people on board had been taken off by Baltimore Sailing Club crash boat, and the vessel was full of water. The volunteer lifeboat crew immediately readied their onboard salvage pump and proceeded to pump the vessel dry. A local rib that was also in the vicinity at the time assisted in stabilising the casualty vessel whilst it was being pumped out. Once all the water was pumped out the assisting rib towed the casualty vessel back to its mooring within the harbour. Baltimore lifeboat then returned to station arriving at 4.54pm.

There were five volunteer crew onboard the lifeboat during the second callout, Coxswain Aidan Bushe, Mechanic Cathal Cottrell and crew members Jerry Smith, Jim Griffiths and Conor Harrington. Conditions within the harbour during the second call were calm with a easterly force 4 wind, no sea swell and good visibility.

Speaking following the call out, Kate Callanan, Baltimore RNLI Volunteer Lifeboat Press Officer said: ‘It was a busy day for our volunteer lifeboat crew with two calls within 12 hours and Baltimore RNLI would like to thank those who assisted in this afternoon’s call out. Please remember if you get into difficulty at sea or on the coast, call 999 or 112 and ask for the Coast Guard.’