As part of their ‘Change Makers’ television series, RTÉ will be at UCC’s Honan Plaza to film the World Premiere of ‘UBUNTU: Local is Global’. The live show is a celebration of hip-hop arts and culture. The program features music, dance, and art exploring how hip hop is a global youth culture encouraging dialogue between diverse cultures.

Ubuntu is the Zulu word for ‘humanity’. It literally means ‘I am because we are’, recognising the interconnectedness of all people. Ubuntu means the local is the global. 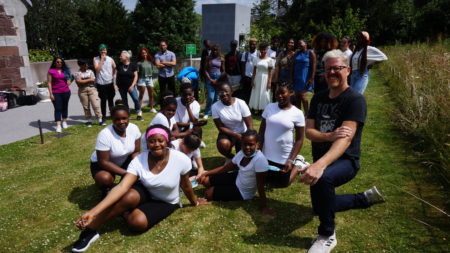 ‘Change Makers’ is a brand new factual series premiering soon on RTÉ 1. It is following the CIPHER project from University College Cork which tracks the impact of hip-hop music around the world from its roots in 1970’s New York. ‘Change Makers’ is coming to Cork to film the performance of this unique collaboration that brings young members of the Cork Migrant Centre together with youth from The Kabin Studios in Cork City.

The ‘Change Makers’ series which is supported by the Irish University Association features Irish research projects that are helping to create change across the country and beyond. This episode focuses on Professor Griff Rollefson’s first-of-its-kind CIPHER project (https://globalcipher.org/) that was funded by the European Union to do this work on hip hop arts and understanding.

Rollefson explains: “‘Ubuntu’ is what this research project is all about—it’s what hip hop culture is about. The show will provide a platform for these young people to teach us about their hopes and dreams—and about what the future can and should look like”.

The UBUNTU performance will feature youth in Direct Provision from the Cork Migrant Centre sharing the stage with youth from the Kabin Studios on Cork’s North Side. The show will also feature the talents of the hip hop luminaries Raphael Olympio, GMC Beats, 0phelia, Outsider YP, Spekulativ Fiktion, Gatch, Pacino Brady, DJ Safari, and other special guest artists. The show is led by Artistic Director and choreographer, Andrea Williams, who has composed a story of global solidarity through struggle and hard won understanding.

It will be outdoors and socially-distanced.

The event is free and open to the public, but ticketed. Register for up to 4 tickets at: https://www.eventbrite.ie/e/ubuntu-local-is-global-tickets-169825794523