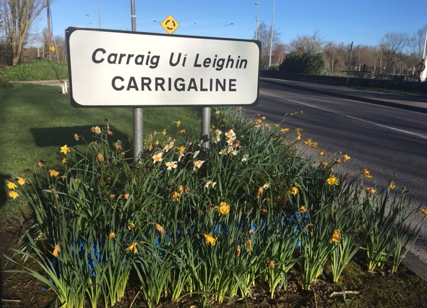 News from Corks’ largest town, with thanks to Barry Cogan

Gaelcholáiste On The Move

Last Friday, October 22nd was the last day pupils of Gaelcholáiste Charraig Uí Leighin spent in their temporary accommodation at Waterpark House and in the eight prefabs, four there and four at the old Gaelscoil. A fleet of four vans moved in and transported the furniture and equipment on Friday and Saturday to the new state of the art Gaelcholáiste in the 35 million education complex on the Ballinrea Road. The staff and pupils will move in on the Monday November 2nd after the Mid Term break. The new Coláiste has capacity for 500 pupils. It was nice to see the event was covered on the 6 o’clock Nuacht ar TG4.

On Thursday October 21st CARA met in the Lions Youth Centre where they had two representatives from SECAD who gave the group a very interesting talk on Healthy Eating and the Environment and all present on the day got some free bulbs (Grape Hyacinths) for the garden. Tea, coffee cake and biscuits were also back, thanks to the tea ladies and all who helped. They will meet in the Lions Youth Centre again this Thursday at 2.30.

October has been a busy few months for farmers as they availed of the dry mild weather, to get seasonal work done. Tillage land was ploughed, tilled and winter barley planted, some grassland was ploughed and reseeded. Long hours were put in to ensure all the slurry spreading was completed by the due date. Silage contractors worked round the clock harvesting the maize crop while the potato growers are harvesting and drawing the produce to refrigerated warehouses for storage. All this farm activity greatly increases traffic through Carrigaline town centre.

After a layoff since March last year the cards are back in Carrigaline GAA Pavilion every Tuesday night. It was great to meet up for a game of 25 in pleasant company last Tuesday.

Carrigaline Senior Citizens will hold their Christmas Dinner in the Carrigaline Court Hotel at 6.00pm on Tuesday December 7th. Names and money to the Post Office.

It’s all hands on deck for the month of November as the members of the Carrigaline Men’s Shed work to complete their 4,000 sq ft new Shed. The big clean-up has started on all the interior and exterior of the building. Inside the flooring and painting of the rooms is complete and most including the kitchen are fully fitted out. Outside the building is still to be plastered and painted, the polytunnel is lined out and ready for erection and a short section of footpath needs to be laid. Financially the Men’s Shed needs a further €30,000 to complete the job. Last Monday the walking group stepped it out from Monkstown to the Fr O’Flynn Park in Passage West and back, on Tuesday the Shed Choir had a fun sing song day. 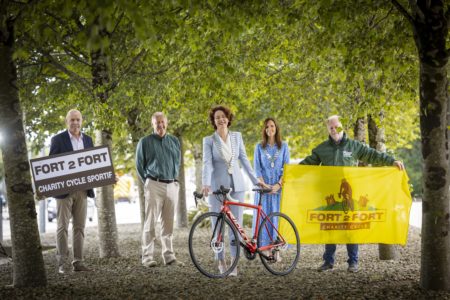 Crosshaven was buzzing with activity on Saturday last as over 620 cyclists and their supporters and spectators turned up for the annual Fort2Fort cycle rally. Lions Provincial, President of All Ireland, Ann Fox, travelled from County Louth to mark the 10th anniversary of the event which is organised by the four Harbour Lions Clubs. Gillian Vaughan, local Lions President welcomed Ann Fox and also Mayor of the County of Cork Cllr Gillian Coughlan, Ministers Simon Coveney and Michael Mc Grath and local Councillors Séamus Mc Grath, Audrey Buckley and Michael Paul Murtagh and participant and cycling enthusiast Tim Lucey Chief Executive Cork County Council. The cyclists were flagged off in batches from 9.30am at the entrance of Camden Fort Meagher by Ministers Coveney and Mc Grath.

The cyclists had three options, to Monkstown and back, Cobh Cross and back or the full distance to Fort Davis, Whitegate and back. A food stop was set up at the Bramley Lodge by Cobh Cross. The cyclists were officially welcomed back to Camden Fort Meagher by Carrigaline Lion Sam Beamish who also participated.

The rally was very well stewarded at this side of the harbour by a large team of the Lions Club members, volunteers from Camden Fort Meagher and a group from the Men’s Shed. It was a most enjoyable occasion and all were full of praise for the organisation and of the scenic routes chosen.

The Lions Club now start gearing up for their annual Christmas Food Appeal in SuperValu and Dunnes in Carrigaline and Centra in Crosshaven.

Anyone who would like to take a short term pledge to abstain from Alcoholic drink during the month of November can do so by contacting the Carrigaline Pioneers. Phone or text Aislinn 087 9699 488. Replacement pins, Christmas cards and calendars are also available.