Currys PC World aims to raise €170,000 in the next year, to fund the training of 17 dogs – Fundraising will be a mix of store and internal initiatives

Currys PC World has announced that Cork-based charity, My Canine Companion as its charity partner. With the cost of training one dog amounting to €10,000 each, Currys PC World, Ireland’s largest electrical retailer has pledged to raise at least €170,000 over the next year to fund training of 17 dogs – one dog for each of the 16 stores, plus one from currys.ie! As well as raising funds, they will also help raise awareness of the charity. 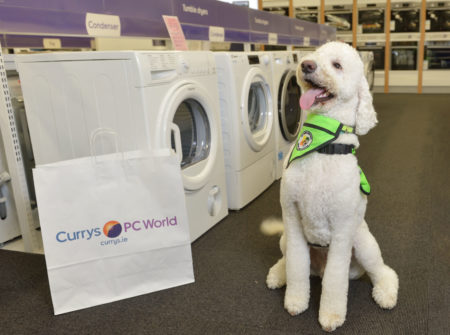 Fundraising throughout the year will be a mix of in-store and internal initiatives, meaning customers and colleagues alike will get the chance to help to raise the vital funds for this fantastic charity. The first activity will see Currys PC World colleagues take part in the 100km walking challenge for My Canine Companion, which all stores will participate in!

“As a complete dog-lover, I for one am thrilled that we have teamed up with the wonderful team at My Canine Companion. The work they do with the dogs, and the service they provide to families across the country is invaluable. We chose to support My Canine Companion for a number of reasons. Firstly, it’s a small Irish charity that provide real life changing support to families in need. Secondly, our business sells many products that can help people with autism. And finally, the charity was actually voted for by the Currys PC World Ireland colleagues. This was hugely important for us as we wanted to engage the full team & ensure everyone would get behind the initiative. We can’t wait to kick off fundraising and hope to hit the target or maybe even exceed it with the help of our customers and colleagues!”

My Canine Companion was set up in 2011 by the husband and wife team Cliona O’Rourke and Niall Ruddy. With humble beginnings from the couple’s home in Blarney, Co. Cork, the charity quickly became the largest provider of service dogs to children and young adults with autism in Ireland. The organisation is now headquartered in Blackpool, Cork and provides a nationwide service. 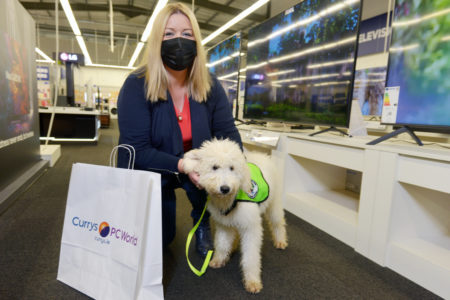 Annually, My Canine Companion provides over 60% of Ireland’s service/assistance dogs to children with autism. The balance is provided by Irish Guide Dogs for the Blind (33%) and Autism Assistance Dogs Ireland (7%). The charity qualifies an average of 45 autism service dog partnerships per year, and currently have 275 working dog partnerships in Ireland.

“We are delighted that Currys PC World have chosen us as their charity partner. We look forward to working with Currys PC World colleagues across all their stores and online platforms raising awareness of autism and the services we provide. Funds raised by Currys PC World will be vital in enabling us to improve the lives of families living with autism as well as helping us to expand our schools therapy services”.

To follow the Currys PC World & My Canine Companion journey or donate to the very worthy cause, please visit www.currys.ie/mycaninecompanion