The Cork branch of Network Ireland, a voluntary organisation that supports the personal and professional development of women, has appointed Maria Desmond as President at its Annual General Meeting this morning. 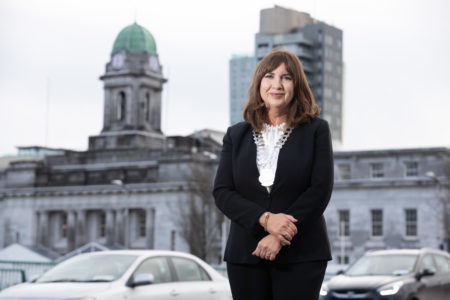 The Cork native, who grew up in a family business in Bishopstown, has a professional background in marketing and market research. She is the Regional Fundraising Manager at Enable Ireland and succeeds out-going Network Ireland Cork president, Barbara Nugent in the one-year voluntary role.

Maria, a former winner of a Network Cork Businesswoman of the Year Award, has been on the Network Ireland Cork committee since 2018, with responsibility for events. She has just completed her role as Vice President and Awards Coordinator. A UCC MScComm graduate, she had 25 years’ experience running two of her own businesses before joining the team at Enable Ireland’s Ballintemple site in 2016.

Speaking about her new voluntary role, Maria said: “I am honoured to be elected President of Network Ireland Cork, the largest Network Ireland branch in the country. Thank you to Barbara for her commitment during the past 12 months and the hard work of the talented 2021 committee. Although it was another challenging year, under Barbara’s leadership, the committee drove through innovative new initiatives including a hybrid event model and a podcasts series.

“With the help of the 2022 committee, I want to build upon this legacy and further grow the profile of the branch. From inspiring monthly guest speakers to networking opportunities; mentorship programmes to promotional opportunities, I hope members can lean on the branch to develop the skills and confidence to progress their careers and businesses in 2022.”

Maria added: “I’m delighted to have the support of a strong committee and a dynamic membership. I’m also proud that our new committee reflects the diversity of Cork with a range of nationalities joining our team — Norwegian, Greek, Hungarian, Argentinian and Chilean.  As a team, we look forward to working together to further strengthen the organisation in Cork.”

Adhering to public health advice, the 2021 Network Cork Christmas party has been cancelled. However, alternative outdoor get-togethers have been organised instead. Further details are available on the Network Cork Facebook page. The first event planned for Network Cork in 2022 is on 12 January and will feature guest speakers Ann Doherty, Chief Executive, Cork City Council; Irene Wallace, Senior Station Officer, Ballyvolane, Cork City Fire Brigade; and a representative from another service.

Maria explained: “Connecting with other organisations within the city and county is one of my goals for the year and I am particularly interested in the future of Cork and the work that goes on to keep us all safe.”