Construction to begin on new primary school in County Cork

Yesterday the the sun shone brightly on the magnificent new four-acre greenfield site when Dr. Fintan Gavin Bishop of Cork & Ross and Mrs. Abina Tattan officially turned the sod for the construction of the new primary school in Carraig na bhFear.

The long awaited new building will replace the existing school which has served the local community since 1974.

As school Patron Bishop Gavin praised the local community, the Board of Management led by Chairman Oliver Manley and the benevolence of Mrs. Abina Tattan and her family who donated an additional three-quarters of one acre to complete the new site. Bishop Fintan remarked that this new school was the first to be commenced in the Diocese since his ordination in 2019 and was a fine example of the commitment to a Catholic Ethos Education in the parish and Diocese of Cork and Ross. 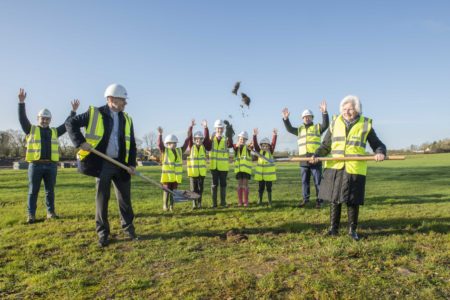 Board of Management Chairman Oliver Manley warmly welcomed Bishop Fintan Gavin and paid tribute to the generosity of the Tattan family. He wished the contractors MMD Construction (Cork ) Ltd and Architects Bertie Pope & Associates every success for the duration of the work onsite which commenced in earnest on January 4th last.

The new building will measure 37,000 square feet and will include a 14 classroom mainstream school building including a hall and a dedicated five class ASD unit.

Principal Marc Sheehan formally welcomed the local Parish Priest Canon Martin Keohane and the Diocesan Secretary Fr. Michael Keohane to the event along with Seán Ó Caoimh of the Cork and Ross Education Secretariat who attended along with representatives of the local GAA club and Community Council.

A representative group of pupils were delighted to be present to assist with the sod turning on what was a historic day for the community and parish of Carraig na bhFear.