A Cork County Council initiative is hoping to see thousands of plastic bottles removed from schools each week. Contactless water refill stations will be installed at 15 schools as part of efforts to reduce single-use plastic waste, allowing students and teachers to fill their reusable bottles with filtered water. 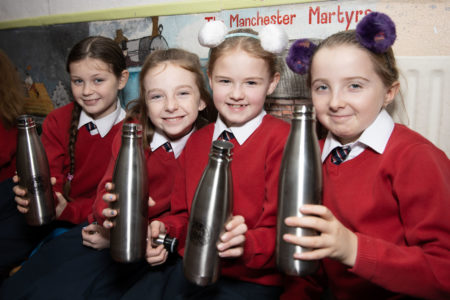 It is part of a Cork County Council competition that was first launched in 2020. Ten primary and five secondary schools have been announced as the latest winners bringing the total number of successful schools to 31.

The Mayor of the County of Cork, Cllr. Gillian Coughlan, said, “It is wonderful to see so many schools taking action against single-use plastics, preventing waste and in turn helping the environment. Plastic can only be recycled so many times which is why it is so important to make the switch to reusable alternatives. There was huge interest in this competition from schools right across Cork County which is why an additional 15 winners have been selected.”

Chief Executive of Cork County Council Tim Lucey added, “This initiative is making a real difference to the amount of waste being produced. A great example is Scoil Chaitigheirn in Eyeries, who no longer receive single-use plastic bottles of water as part of their School Meals Programme. This simple change to a water refill station has eliminated more than 400 single-use plastic bottles being discarded in the school every week.

The prize is worth approximately €1,300 to each school and includes a free water refill station and fitting. The contactless machine is operated by a sensor that recognises when a bottle is placed underneath. It also counts the number of refills.

Schools were assessed and scored on their need for a refill station and its potential to reduce single-use plastics. They also needed to show previous environmental measures implemented and commit to raising awareness about the initiative in the school and in the community.

The winning schools are:

How to Get Legal Recognition of your Preferred Gender
Previous Post
St Vincent de Paul raise €275,000 from car raffle