SVP South West “humbled” by support of Cork and Kerry public as over €275,000 raised from annual car draw 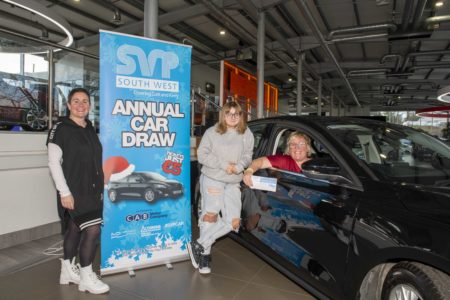 St Vincent De Paul South- West has paid tribute to and thanked the public for its “phenomenal” support of its annual Car Draw in association with CAB Motor Company.

The charity has reported that more than €275,000 was raised from the 2021 car draw through ticket sales and donations both Kerry and Cork since its launch in late October and they are humbled by the generosity of the public during such difficult times.

SVP South-West Regional President Paddy O’Flynn said the much-needed funds would “go a long way” to assisting struggling families in the region and will help fund key supports such as food vouchers and hampers, heat and utility costs and education, with families contacting The Society seeking urgent assistance and support for each of these in recent weeks.

Mr O’Flynn said: “We’ve always had extremely generous support for our annual car draw from the people in Cork and surrounding areas. We made no secret of the fact that this was going to be an unprecedentedly difficult year for us in terms of fundraising as a result of COVID-19 and people came out in their droves to support us – it was a huge success.
“We are eternally grateful to every single person who pledged their support to this year’s car draw. The money raised will enable us to continue supporting those in need during these extremely challenging times, with all of the money raised in Cork going to support families and individuals in need in Cork and all the proceeds raised in Kerry going directly to support families and individuals in Kerry.

“Once again, I would like to extend a sincere and heartfelt thank you to everyone who donated or bought raffle tickets for our car draw, and also a huge thank you to our sponsors CAB Motor Company for their continued support,” he concluded.

She said: “This was the first year that Kerry was included in the draw and I would like to extend a sincere thank you to all of the people in Kerry for their support of this inaugural car draw – it was an incredible turn out for our first year and the support and donations received will be instrumental to us in helping families and individuals throughout Kerry who greatly need our support.” 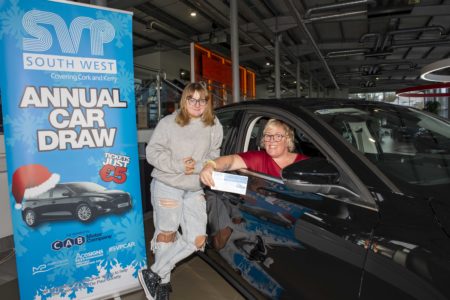 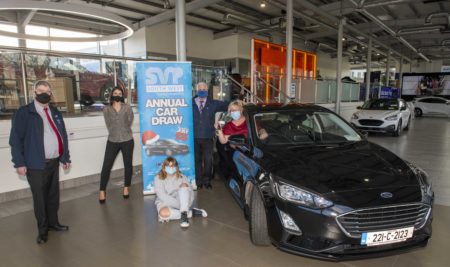 SVP South West (Society of St. Vincent de Paul) “humbled” by support of Cork and Kerry public as over €275,000 raised from annual car draw. The car was presented to the lucky winner, Aileen O’Leary from Ovens, Co. Cork at CAB HQ on the Monaghan Road.
Pic: Brian Lougheed