Relatives of the 1916 leaders will bring their vision for a rejuvenated Moore Street 1916 quarter to Cork City’s Nano Nagle Place in March 2022. The Moore Street Battlefield Site dubbed ‘the most important historic site in modern Irish history’ by the National Museum of Ireland has been the subject of a two-decade resistance between 1916 relatives, the Government and UK property developers. The Moore Street Historic Area Urban Master Plan prepared by Fuinneamh Workshop Architects, Cork and Kelly Cogan Architects, Dublin was launched to public acclaim in Dublin’s City Hall in December 2021. It begins its nationwide tour in Cork city with a launch on Saturday March 12th at 2pm featuring presentations from the descendants of 1916 leaders and the design team.

The Rebel County has close links with Moore Street and the events of Easter Week 1916. Skibbereen man Gearoid O’Sullivan was ADC to 1916 leader Sean MacDiarmada and chosen by Padraig Pearse to hoist the tricolour over the GPO at the beginning of the Rising. His cousin Michael Collins acting as ADC to another Proclamation Signatory Joseph Plunkett led the evacuation from the burning GPO. Tracton man Diarmuid Lynch IRB organiser, ADC to James Connolly and confidant to Proclamation Signatory Tom Clarke was the last man to leave the GPO inferno and seek shelter in the laneways surrounding the Moore Street terrace. The relatives plan re-imagines the historic area as a mixed use hub with a strong primary emphasis on the social, cultural and historical rather than commercial. Apartments and housing will be subtly woven throughout the development alongside business incubator pods, studios, galleries and creative spaces. The iconic street market which has been degraded over recent years will be rejuvenated with extra stalls, providers and retail spaces. The 1916 commemorative element will be carefully imprinted into the grain of the area. Plaques, artworks and a visitors centre in No 16 Moore Street will tell the story of the GPO evacuation and Pearse’s surrender whilst honouring the 320 men and women who held out in the terrace in Easter Week 1916. The exhibition will run at the Nano Nagle Place from 12th-26th March 10am-5pm, Tuesday-Sunday. Admission is free. 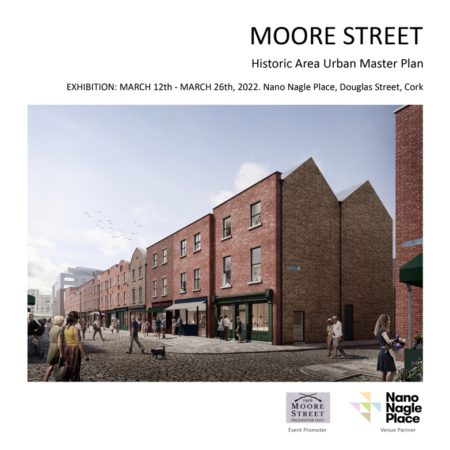