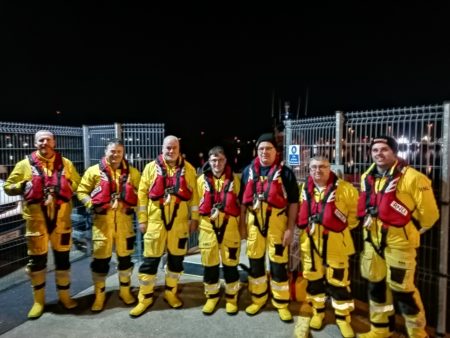 Castletownbere RNLI were launched last night (Wednesday 09 March 2022) just after 22:00 to go to the assistance of a crewman onboard the Irish Navy vessel L.E. George Bernard Shaw who had become injured during sea exercises off the coast of West Cork

Castletownbere lifeboat volunteer crew were requested to launch by Valentia Coastguard Marine Coordination Centre to provide assistance to the man who was onboard the naval vessel which was at anchor at Lawrence Cove off Bere Island in West Cork. The lifeboat was launched within minutes under the command of Coxswain Dean Hegarty with crew David O’Donovan, Martin Cronin, Dave Fenton, Seamus Harrington, Marc O’Hare and Donagh Murphy.

At 22:23 the lifeboat arrived onscene and conditions were described as very calm. The crewman was transferred by stretcher from the naval vessel to the lifeboat where he subsequently received casualty care. On arrival at Castletownbere RNLI Station at 22:56, the injured man was met by paramedics from the National Ambulance Service and he subsequently received medical assessment and attention.

Commenting on the callout Castletownbere RNLI Lifeboat Operations Manager, Paul Stevens, stated: ‘Thankfully, this was a very straightforward call out and everything went very smoothly – we wish the injured crewman a full and speedy recovery’.