Scoil Mhuire Gan Smal students scooped top prize at the Cork City Student Enterprise Programme final for the second year in a row at an event that took place in Devere Hall, UCC, this week. Once again it was a dynamic duo who prevailed in a colourful and exciting final at UCC, with Emily Twomey and Eimear Henchoin following in the footsteps of last year’s winners Vanessa Byrne and Niamh O’Leary, from the Blarney secondary school.

Transition Year students Emily and Eimear won the overall prize with their mini-company, Save 4 Change, a money saving box that separates coins into their various denominations. The Scoil Mhuire Gan Smal duo overcame some very competitive entries and pipped students from Colaiste an Spraid Naoimh and Scoil Mhuire to the post in second and third place respectively.

Initiated by the Local Enterprise Office, Cork City, the Student Enterprise Programme began in September and was open to students from all city second level schools. Other schools that reached the final of the event, which was celebrating its 20th anniversary, were Mount Mercy, Glanmire Community College, Bishopstown Community School and St Angela’s College.

Speaking after the awards ceremony at UCC, Dr Niall O’Keeffe, Head of Enterprise, with Cork City LEO, said, “It’s great to have a live Student Enterprise Programme final for 2022 so that the hard work, commitment, and innovation of the students can be seen in person. There is lots of learning through participation in events such as these and there is a lot of credit due to the students and teachers involved for their ability to maintain focus and drive since last September.” 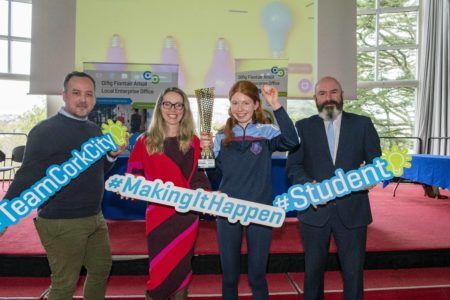 The winning pair from Scoil Mhuire Gan Smal were presented with a trophy and their school was the recipient of a cheque for €1500. Emily and Eimear will also go on to represent the Local Enterprise Office, Cork City, at the National Student Enterprise Awards final at Croke Park on Wednesday, May 18.

Concluding his comments at the first live event of its kind in Cork for two years, Dr O’Keeffe, paid tribute to the final’s organisers: “I’d also like to acknowledge the hard work of the team behind the event, particularly Theresa Mulvihill and Olive Guerin of the Local Enterprise Office Cork City.”