It was a successful year for Cork native, Jack Reardon, as his thesis, authored “A Cork Hydrogen Deployment Plan” won him an academic award from the multinational engineering company, ARUP.

Jack completed his Masters of Engineering, ME Energy Systems Engineering in National University of Ireland, Galway in May 2021, and his innovative thesis attracted the attention of Ireland’s first ever green hydrogen company, EIH2. His thesis made a considerable impression on EIH2’s founder Pearse Flynn, CEO Tom Lynch, and COO Catherine Sheridan. In August of the same year, Reardon was offered a position on the team as a Project Support Engineer.

EIH2, a company that is committed to achieving net zero emissions by 2050, is currently developing a portfolio of projects that Jack supports through his engineering analysis, business development and project management. 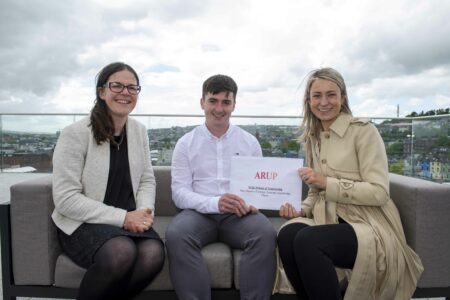 Taking pride in their employees, CEO Tom Lynch of EIH2 stated that “At EIH2 we are proud to have Jack as a team member and we jointly celebrate his achievements. His fresh knowledge and energy are a great mix for our projects, and we look forward to fostering his skills and talent to build a path towards a Net Zero 2050 Ireland where green hydrogen plays a key role”.

Lecturer of Energy Systems Engineering in Mechanical Engineering of the former NUI Galway scholar, Dr. Rory Monaghan, also stated that “On behalf of NUI Galway, we extend our congratulations to Jack Reardon from EIH2. We are delighted to witness green hydrogen gaining momentum through these recognitions and fully support the efforts and skills of a young generation, if anything, we need more!”

Jack is continuing to work and expand his expertise in the hydrogen sector with EIH2, while he leads in Ireland’s transition to a clean and independent energy future.

Jack said: “This is a great honour for me to receive this award for my masters thesis on a Cork Hydrogen Deployment Plan. As a proud Corkonian, focusing on the Cork Region made it very enjoyable. I would like to thank Dr. Rory Monaghan and his team at NUIG and all those who supported me throughout the year and were part of this learning experience”.