9 hour RNLI rescue of yacht off South West of Cork

Baltimore RNLI were called out to provide assistance to a yacht with four people onboard that got into difficulty 52 miles off the coast of Baltimore, West Cork, yesterday (Sunday 5 June). 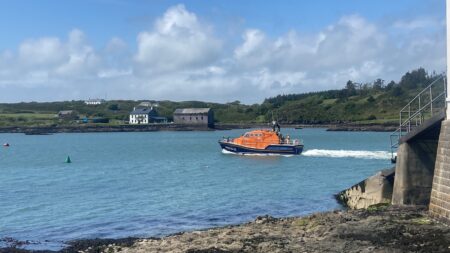 The volunteer lifeboat crew launched their all-weather lifeboat just before 1pm, following requests from the Irish Coast Guard and the UK Coastguard to go to the assistance of a 36 foot motor yacht, with four people on board, which had encountered difficulties and was 52 miles south of Baltimore.

The Baltimore all-weather lifeboat crew arrived at the casualty vessel at 3.22pm. After making sure all four people onboard were okay, Coxswain Aidan Bushe assessed the situation and decided that undertaking a tow was necessary and the safest way to assist the casualties.

There were six volunteer crew onboard the lifeboat, Coxswain Aidan Bushe, Mechanic Micheal Cottrell and crew members Pat Collins, David Ryan, Colin Whooley and Jim Griffiths. Conditions at sea during the call were choppy with an easterly force 3-4 wind, a 1.1m sea swell and good visibility.

Speaking following the call out, Kate Callanan, Baltimore RNLI Volunteer Lifeboat Press Officer said: ‘It was a long callout for our volunteer lifeboat crew who spent over 9 hours at sea, but the occupants of the yacht did the right thing in requesting assistance. We wish them well with the rest of their journey. If you get into difficulty at sea or on the coast, call 999 or 112 and ask for the Coast Guard.’