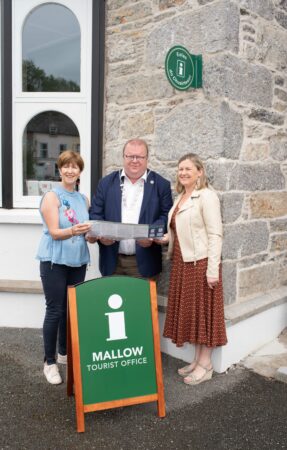 The Mayor of the County of Cork, Cllr Danny Collins has officially opened the newly renovated Spa House in Mallow. The historic, attractive building dates back almost 200 years and has been given a new lease of life serving as the town’s new tourist office.

Mallow first became a popular holiday and retreat destination in the 1720s after news spread about the medicinal and curative properties of its spring water. The town took inspiration from Bath and built promenades, guest houses and organised social events.

The Spa House was constructed in 1828 to replace the existing pump house and was commissioned by C.D.O. Jephson, the town’s proprietor who lived at Mallow Castle. It was designed by George Pain in the Tudor Revival Style and contained a pump room, an apartment for medical consultation, a reading room and baths. 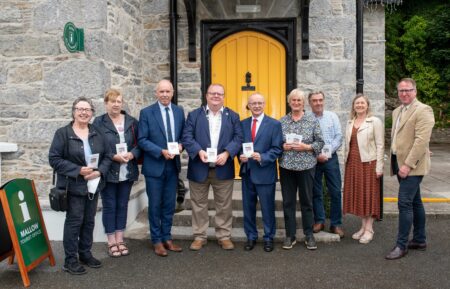 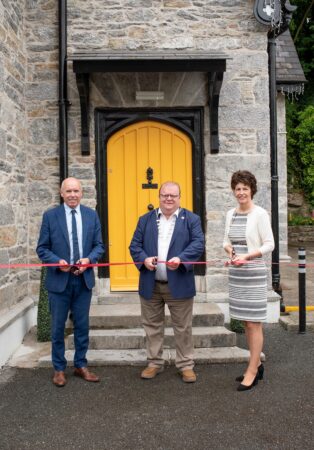 Over the years the house became a private residence and was also used by Cork County Council’s Energy Agency. Cork County Council has now funded and completed a €280,000 refurbishment project of the landmark building. The Spa House is now home to the town’s new tourist office, the Council’s Local Enterprise Office and a meeting room for Avondhu Blackwater Partnership.

Speaking at the launch, Mayor Collins said, “The Spa House is one of Mallow’s most loved buildings and I’m delighted to see it returned to full use. It has a fascinating history and the water from this site was even bottled and sold in Cork city more than 200 years ago. The legacy of the Spa House is one that blends tourism and entrepreneurship. Visitors flocked from far and wide to experience the health benefits of the spring water and will be returning again to the new tourist office. It is also fitting that the Spa House will also be the location of Cork County Council’s North Local Enterprise Office as well as a meeting space for Avondhu Blackwater Partnership.”

Chief Executive of Cork County Council, Tim Lucey highlighted how, “As a protected building, the Spa House has been extensively and carefully renovated. The works were fully funded by Cork County Council and include new lime-based plaster work internally and pointing of the stone which are important from a conservation and architectural perspective. The Spa House is just one element in our ambitious plans for Mallow which include the new boardwalk in the town, the playground, Mallow Castle walled garden restoration and new signage, all of which have been completed. Planning has been granted for improvements to Mallow Town Park and the feasibility assessment on the Mallow to Dungarvan Greenway is progressing well.”

In reopening the Spa House, it was an opportune time to launch the latest feature in Cork County Council’s Historic Map series. The Mallow Historic Town Map provides a brief history of the town from the arrival of the Normans in the 12th century until the town’s more recent history as a market and spa town. It highlights 35 heritage buildings and features within the town including the Clock House, Mallow Bridge, churches, Mallow Castle and house. Each site is accompanied by a brief description.

Mayor Collins added, “Mallow has more than its fair share of key historical sites. The new map provides visitors to Mallow with an authentic heritage experience. It draws attention to the familiar and less well-known town features including the unusual interesting variety of sash windows that can still be seen today. It also tells the stories of famous people associated with the town, all in a beautifully illustrated map. ”

The Historic Map series is funded through the Cork County Council Municipal District offices. Mallow is the 13th in the series and joins Bandon, Kinsale, Clonakilty Dunmanway, Bantry, Schull, Skibbereen, Castletownbere, Charleville, Mitchelstown, Millstreet and Macroom. The maps are available in tourist offices, libraries and digitally on the Cork County Council website. https://www.corkcoco.ie/en/visitor/cork-county-historic-town-maps