Plans to restore WW1 US Naval Base Pier in East Cork, Ireland

A community group in Cobh plans on repairing the American Pier at Whitepoint to protect this historic amenity and ensure the area remains safe for swimmers.  It is also the last physical publicly accessible reminder of the US Navy’s presence in Cork Harbour. 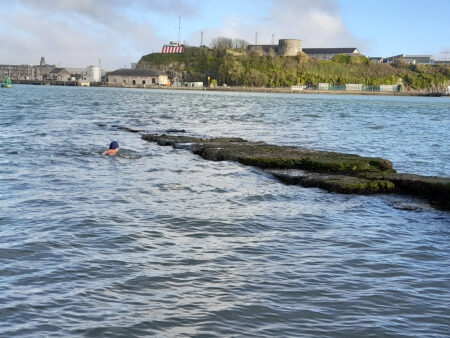 The project is being driven by a group of residents from Whitepoint in association with Cobh Tidy Towns and other community groups, who commissioned a consultant’s report on the repair of the Pier.

The American Pier was used by the United States forces in 1918 to land servicemen for treatment in the US Navy Base Hospital No 4 then located in Whitepoint. Since then, it has been used by generations of Cobh families for swimming at this beautiful and sheltered beach amenity area close to the town, which is the only such amenity in the area.

The pier, which over the last 50 years has deteriorated into a very poor condition, requires immediate attention. The report by Southgate Associates, Heritage Conservation Specialists, outlines three possible repair options. The most sympathetic is estimated to cost €110,000. To fund the project the committee have set up a GoFundMe page and associated social media platforms.

Attendees at the launch in Cobh last week were given a brief history of the US Navy Hospital and pier, details on the report and there was an address by Bob Savage, Vice President, Regional CIO for EMEA and Cork Site Leader Dell Technologies who supports the initiative.

For more information see facebook.com/americanpier or search for American Pier Cobh on Go Fund Me.