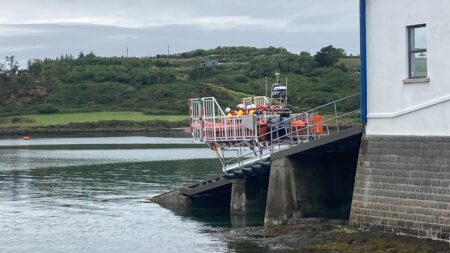 Baltimore RNLI have had two call outs in two days, both to boats that had got into difficulty near Cape Clear Island in West Cork.

On Friday 26 August, Baltimore RNLI’s volunteer lifeboat crew launched their inshore lifeboat at 10.27am, following a request from the Irish Coast Guard to go to the assistance of a 32 foot yacht with one person on board which was propped approximately 0.5km north of Bird Island just off Cape Clear.

The Baltimore inshore lifeboat crew arrived at the casualty vessel at 10.39am and volunteer crew member John Kearney Jnr was put aboard to assist the lone sailor. Whilst they were able to free the vessel from the pot buoy line the propeller was still fouled so helm Pat O’Driscoll decided that undertaking a tow was necessary. John Kearney Jnr assisted in rigging a tow and the lifeboat and casualty vessel were underway by 10.58am. The lifeboat then proceeded to Baltimore Harbour, the nearest safe and suitable port, arriving at 12.05pm. Once the casualty vessel was secured at the pier, the lifeboat returned to the station, arriving at 12.14pm.

There were four volunteer crew onboard the lifeboat, Helm Pat O’Driscoll and crew members Kieran O’Driscoll, John Kearney Jnr and Rob O’Leary. Assisting at the station were Rianne Smith and Seamus O’Driscoll. Conditions at sea during the call were calm with a north easterly force 2 wind, no sea swell and good visibility.

Yesterday (Saturday 27 August), the volunteer lifeboat crew launched their inshore lifeboat at 3.15pm, following a request to go to the assistance of a 28 foot fishing boat with two people on board which was propped on a pot buoy near South Harbour in Cape Clear Island. Baltimore Lifeboat’s Operations Manager, Tom Bushe, had initially been alerted to the problem by a relative of the skipper of the vessel.

The Baltimore inshore lifeboat crew arrived at the casualty vessel at 3.26pm and whilst the skipper and his crewmate had managed to free themselves from the pot buoy line, they were unable to manoeuvre so helm Pat O’Driscoll made the decision that a tow was required. The lifeboat passed a towline to the vessel and the lifeboat and casualty vessel were underway by 3.30pm. The lifeboat proceeded to North Harbour on Cape Clear Island, the nearest safe and suitable port on this occasion. The casualty vessel was secured at the pier in North Harbour and the lifeboat departed Cape Clear at 4.32pm and arrived back at the station in Baltimore at 4.45pm.

There were four volunteer crew onboard the lifeboat, Helm Pat O’Driscoll and crew members Eoin O’Driscoll, Ian Lynch and Johnny McKenna. Assisting at the station were Rianne Smith and Sean McCarthy. Conditions at sea during the call were calm with a south easterly to easterly force 2-3 wind, no sea swell and good visibility.

Speaking following the call out, Kate Callanan, Baltimore RNLI Volunteer Lifeboat Press Officer said: ‘It has been a busy couple of days for Baltimore Lifeboat and as always we are grateful to our crews for being ready to answer their pagers as soon as required. Please remember, if you find yourself in difficulty whilst at sea call 999 or 112 and ask for the Coast Guard.’

US Multinational Opens New European Office in Cork
Previous Post
There are laws against allowing your dog foul on a pavement, but there is little enforcement