The 35th Quality Hotels West Cork Rally took place on the weekend of
the 16th & 17th March. Despite the tough economic conditions 128 cars
took to the start in the main field. Daragh O’Riordan who won the
event in 2012 was the top seed and his new Ford Fiesta WRC was
certainly the centre of attraction among the large crowds that
gathered in Clonakilty. Brian O’Mahony was at 2 in his new Subaru
Impreza WRC S14, while two more Cork crews followed, Kevin Kelleher
and Denis Cronin also Subaru WRC mounted. John Dalton was back again
in his Darrian T90 GTR while Owen Murphy rounded off the top six in
his Mitsubishi Lancer despite being more used to forestry rallying.

Frank Kelly and Damien McCarthy were next up at six and seven in an
Escort and Honda Civic respectively. A trio of WRCs followed in the
hands of JJ Fleming (Focus), John Cope (Impreza) and Eoin Doyle
(Focus) which made it a very competitive top ten. Just outside of the
top ten were drivers such as Wesley Patterson, Edward O’Callaghan,
Adrian Hetherington and Pat O’Connell who was another forestry man
trying his luck on tarmac.

Heavy overnight rain had cleared to a beautiful sunny morning, but
there was some standing water about. However due to the later start to
the event this year; the roads had dried out a little by the time the
first car left the start ramp at 12.50pm. There were some slippery
patches in places as the crews headed for Glandore which was the first
stage. O’Riordan was cautious on the first stage as he tried to get
used to his new car while Brian O’Mahony was four seconds quicker.
Behind the front two though, some real drama was taking place. Third
seed Kevin Kelleher had been fastest up to the halfway point of the
stage but as he approached the end his car caught fire. The following
cars were all held up as they all helped bring the fire under control,
fortunately without any major damage but his rally was over. Also in
trouble was Damien McCarthy as his engine began to overhead quite
badly and he was forced to retire at the end of the stage. Eoin Doyle
also stopped on the stage which meant the rally had lost three of its
top ten by the end of the first test.

On the next two stages Denis Cronin and Owen Murphy put in some
excellent times and were separated by twelve second heading into
service. JJ Fleming was also going very well to hold third place as
O’Riordan and O’Mahony tried to get their cars set up to their liking.
John Dalton suffered a puncture on the second stage which dropped him
out of the top ten. Adrian Hetherington was putting in a storming
drive to lead the modified challenge with Frank Kelly and Ed
O’Callaghan close by.

On the second run of Glandore Cronin put in a fantastic time to
stretch his lead out to 28 seconds from Murphy, while O’Mahony was now
happier with the car and was only two seconds slower than Cronin.
Murphy was showing signs of contact with the scenery and was having
some clutch trouble as well. Also in clutch trouble was Wesley
Patterson who had slipped back the order somewhat. On the last two
stages of the day Cronin and O’Mahony continued to trade times and
pull away from the pack. Murphy was third and despite his best efforts
knew he wouldn’t be able to keep up with the leading two as his car
was on the absolute limit. Fleming was back in fourth and still going
well, while Daragh O’Riordan had lost time with a puncture on stage
five and had mismatched tyres on Ardfield which cost him even more
time to leave him almost two minutes behind the leaders. Dalton was
back on a charge and reeling in Hetherington and Kelly as he got his
confidence back and was looking forward to the ultra-fast Ring stage
the following morning.

The second day began with the classic Ring stage which was bathed in
sunshine after more early morning rain. The roads dried out quickly
and O’Riordan took fastest as he continued to get used to the Fiesta
while O’Mahony took five seconds from Cronin to cut the gap at the top
to 23 seconds. As expected Dalton moved ahead of Kelly after a
storming drive to record third fastest time while Hetherington was now
in the Welshman’s sights. The second stage in Clogagh saw O’Mahony
close the gap down to just five seconds as Cronin had a spin and a
stall, while Pat O’Connell went off the road and Leonard Downey also
retired. Dalton had lost some time to Hetherington on Clogagh, but on
the following stage he was on top of the modified pile as the Escort
driver crashed out of the event.

With just three stages to go Cronin needed to stop the rot but all of
the momentum seemed to be with O’Mahony as he took another ten seconds
to move into the lead by eight seconds after Ring. Owen Murphy was
still holding onto third place despite the pace taking a serious
mechanical toll on his car. Daragh O’Riordan was starting to put some
serious pressure on and was just 30 seconds behind. Fleming had
dropped back almost into the clutches of a flying Dalton who admitted
that things got a bit hairy at times as he strove to get into the top
five.

On the penultimate stage in Clogagh O’Mahony had a spin near the start
of the stage and Cronin was back in the lead by 4.7 seconds. Murphy
had to give nine seconds to O’Riordan but was still over twenty
seconds ahead and looked secure in third. Dalton was now just eight
second behinds Fleming and Frank Kelly lost over twenty seconds with
an overshoot and spin. It was all to play for heading into the last
stage and the stage was set for a massive push from the top two.
However unfortunately it all went wrong for Cronin who went off the
road temporarily blocking the stage. The resultant cancellation meant
O’Mahony took the spoils in what was a fantastic battle over the
weekend. It was tough luck on Cronin but he showed he can be a force
to be reckoned with in the new Subaru.

Brian O’Mahony’ s father Frank had come close to winning the event on
several occasions but never quite made it. Brian made up for that with
an excellent performance and was a deserving winner as he upped the
pace in a big way on the second day. Owen Murphy was delighted with
second place in his Mitsubishi Lancer, showing that he is equally
adept on tar as he is on gravel. It was very much a testing weekend
for Daragh O’Riordan in third place but he was happy with the
potential of the car and found it very much to his liking. It was the
first time since 1979 that three Cork drivers had finished on the
podium of the event.

JJ Fleming equalled his best ever result on the event with fourth
place, while John Dalton was delighted to have finished fifth and
winner of the Bones O’Connor modified trophy for the sixth time in
seven years. Frank Kelly and Edward O’Callaghan thrilled the crowds
with their commitment and car control over the weekend to take sixth
and seventh eighth respectively. English visitor John Cope was in
eighth place in his Subaru Impreza WRC, while two excellent drives saw
Stephen Carey and Jason Ryan complete the top ten.

A huge battle between the Historic Escorts of Tomas Davies and Wesley
Patterson eventually swung the way of the Welshman by just six seconds
and they finished 11th and 12th overall respectively. The Historic
Rally was won by Todd and Peter Falvey in their Porsche 911 RS, while
the junior rally was won by Richard Moore in a Honda Civic. Cal
McCarthy took the honours in the Sunday run to alleviate some of the
disappointment of retiring on the first stage of the rally with a
broken driveshaft. In total 76 cars in the main field made it to the
finish of what was a very successful and enjoyable event under the
stewardship of the Clerk of the Course Martin Godfrey. 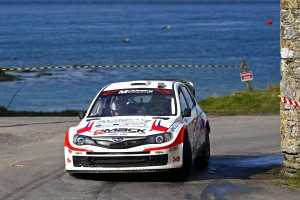