The former Deputy Lord Mayor of Cork Cllr Emmet O’Halloran (FG) has said
that he is furious at the emergence of promotional material for Cork
Rebel Week which refers to Michael Collins as a langer.

O’Halloran who was first behind the idea to establish an International
Cork Day as part of The Gathering said that both as a Corkonian and a
member of Fine Gael he was incensed at the brochure which is due to be
hand delivered to every household in Cork City this week.

“I am calling on Cork City Council to immediately cease all delivery of the brochure and to issue an apology. The term langer in Cork is commonly associated with someone who is a bit of a half wit or an unlikeable person may have nothing constructive to offer. Michael Collins is one of our greatest patriots and most certainly does not fit this description”

Many members of the Collins family including former Government
Minister Nora Owen are due to participate in various events throughout
Rebel Week including a debate on Cork’s involvement in the 1916 and
subsequent War of Independence.

“I don’t think the general public would be too happy if James Connolly or Padraig Pearse were referred to in this manner. Whoever was behind this brochure did not display a good understanding of the Cork Psyche” he concluded. 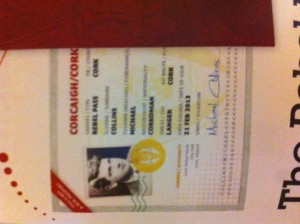 Above: Exclusive picture of the incorrect brochure obtained by TheCork.ie

Former Deputy Lord Mayor angry that at Collins “langer” reference in brochure added by TheCork.ie on 30th September, 2013
View all posts by TheCork.ie →