The Oscar-winning actor Jeremy Irons has been made an Honorary Corkman.

The 65-year-old English actor has lived in West Cork since the late 1990’s when he bought and then restored Kilcoe Castle outside Ballydehob.

‘Now I’m an honorary Corkman I am not quite such a blow in’ Irons joked at today’s gala lunch in the Rochestown Park Hotel, Cork.

Irons was presented with the title by last weeks Honorary Corkman Lord David Puttnam, who also has a second home in West Cork. 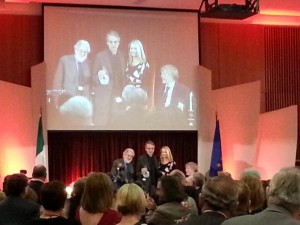 Photo: Jeremy Irons displays his award which he says will have pride of place in his West Cork house, whereas his many Acting awards are kept in England.