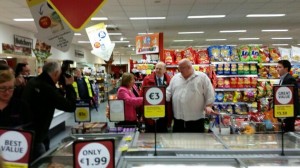 The Minister for Finance has welcomed an improvement in Ireland’s credit
rating.

Moody’s announced just before the weekend that it is moving the state up by
two notches to from “Baa3” to “Baa1” saying there is now a “stable
outlook”,

It’s the second time in six months that Moody’s has boosted the rating.

Speaking to TheCork.ie Minister Noonan said the new credit rating will have
a positive effect across the board