Johanne O’Sullivan, a native of Ballinlough Co. Cork and a class
teacher in Belmayne Educate Together in Dublin was announced as a
winner of a bursary from the Irish National Teachers’ Organisation to
help fund education research.

Ms O’Sullivan’s research (to Masters Level in Marino Institute of
Education) looks at the experiences of immigrant parents with children
in the Irish education system. It draws on previous research showing
that immigrant parents often feel intimidated due to a lack of
knowledge about the education system and other government agencies. It
examines the influence language barriers, work commitments, discomfort
levels with an intimidating system and a perception that they are
unwanted have on parents’ experiences with Irish schools. A key
concern will be to analyse the role immigrant parents feel they have
in their child’s education in Ireland.

Immigrants tend to be more vulnerable in times of economic downturn.
Ms O’Sullivan’s work will look at the extent migrant families with
children in the education system have been affected due to public
service and education cutbacks.

The cultural make-up of Ireland changed during the Celtic Tiger due to
increased immigration. Figures from the census 2011 showed that 12% of
the current overall population was born outside of Ireland. This
means that working with immigrant parents is now a daily occurrence
for all schools. The Immigrant Council of Ireland has criticised
migration policies in this country, stating that they are largely
focused on controlling and excluding and treat immigrants as economic
units, rather than focusing on their rights and entitlements. These
contribute to a sense of exclusion among the immigrant community.

Ms O’Sullivan will interview four groups with participants in each
group of the same ethnicity. It is hoped that interviewing in small
groups, with interviewees of matching ethnic background will increase
the volume of information received from participants. Twelve parents
will be chosen from the largest migrant populations in Irish schools.
This includes Polish, Romanian, Lithuanian and Spanish parents. The
parents will be interviewed on topics such as accessing governmental
support and services, school enrolment in Ireland, parental
involvement and their experiences with the education system and
government agencies in Ireland.

The study will consider some of the challenges immigrants face from a
lack of co-ordination between state services and poor information
about social housing and entitlements. It has been found that the
prioritisation of education becomes reduced when families do not have
access to adequate housing and living standards are at risk.

A lack of training focused on accommodating different cultural
backgrounds can have adverse effects on how immigrants are treated by
public services. These negative attitudes may be in turn affecting
immigrant integration in the Irish education system.

Speaking at the presentation of the bursaries in Dublin, the President
of the INTO, Sean McMahon said it was a source of pride to the INTO
that up to 75% of primary teachers voluntarily undertake additional
training and study.

“By acquiring new skills and expanding their knowledge, teachers
enhance their practice and ultimately everyone benefits – including
the children in their classrooms,” said Mr Mc Mahon.

Every year since 1993 primary teachers undertaking research have been
supported by the INTO through the Bursary Scheme. This year, five
awards of €1,500 were made. More than 63 applications were submitted
in December and judged by an independent assessor from one of the
colleges of education.

The awards ceremony was held in the Teachers’ Club, Parnell Square, Dublin. 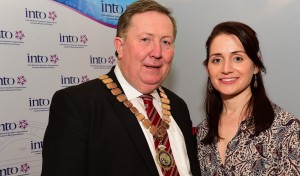