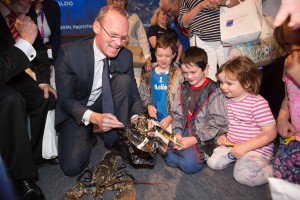 Above: File photo of Simon Coveney.

The Minister for Defence, Mr. Simon Coveney, T.D. (Cork South Central constituency), has announced that the 3rd new ship for the Naval Service is to be called LÉ William Butler Yeats. The ship is scheduled for delivery in July 2016 and will be the same build as LÉ Samuel Beckett delivered in 2014 and LÉ James Joyce, which arrived in the Naval Base, Haulbowline last Friday.

Minister Coveney said that the naming of the ship after William Butler Yeats, a world renowned Irish poet, literary figure and Nobel Laureate,” will continue to facilitate greater recognition of our Naval Service ships when visiting foreign ports and set a tone domestically reflecting a more modern Ireland and Irish Naval Service”.

The Minister added that” it is very appropriate to mark the 150th anniversary of the birth of W.B. Yeats by making this announcement today in Lissadell House. The naming continues a strong link between W.B. Yeats and Irish Naval Service as the first foreign mission by an Irish Naval Service ship, LÉ Macha, in 1948 was to repatriate the poet’s remains to Ireland following his passing in France.”

The ship will be formally named and commissioned in Ireland after its delivery to Ireland next year.