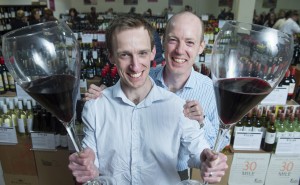 Cork wine company Curious Wines, run by brothers Mike Kane and Matt Kane and who opened their second wine warehouse in Kildare in 2014, are expanding again.

After five years in the Kinsale Road Commercial Centre, the company recently completed a move just around the corner to larger, refurbished premises on the Tramore Road. MD Mike explained the move was more than just a facelift to their retail operations:

“We’re expanding the Curious concept into more than just wine”, explained Kane. “The growth in our online wine gifts business last year showed us curious consumers wanted more than just good wine, and the interesting thing is our customer base is not just local or even national, but international.”

Curious is expanding into what Kane calls “all things good taste” by offering an extensive range of artisan foods from local and international producers as well as designer glass and homeware. Following on the success of the award-winning CuriousWines.ie, the company intends launching a new website, CuriousEmporium.ie, that will make, in particular, the best of Irish produce available to the international diaspora.

“We noticed a strong trend developing for Irish people abroad to order wine online to be sent to family in Ireland, particularly around holiday periods. So we thought why not switch it around and offer friends and family in Ireland the ability to send the best Irish produce abroad. Curious Emporium will do that.”

The new Curious Wines store opened in Tramore Commercial Park and the company is celebrating seven years in business with a Grand Opening event tonight, with more than 100 staff, customers and guests in attendance.