How many times have you tried to buy some tiny item in a shop and have had to say “I’m sorry I only have a 50 [euro note]… from the ATM”?

Maybe its a throwback to Celtic Tiger when a 50 euro note was the minimum people would be seen with, or a conspiracy theory designed to promote a cashless society and reply on debit cards? in truth it’s neither of those things it is just a convention that has existed in Ireland where ATMs only dispense higher value notes. 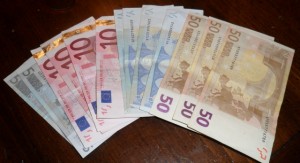 Fianna Fáil Spokesperson on Finance is Carrigaline based TD Michael McGrath. He has has called on the banks to provide evidence that they are complying with recommendations of the National Payments Plan, approved in April 2013, which aimed to achieve a significant increase in the number of €10 notes dispensed from ATMs. Up to that time cash dispensing machines were restricted to €20 and €50 denominations in the vast majority of cases. This was contrary to the norm in Europe where €5 and €10 are routinely available.

Deputy McGrath has also called for the targets for €10 notes to be increased significantly.

“I believe customers have a strong preference for being able to access a variety of denominations of notes in order to be able to meet their out of pocket cash expenses. Many people prefer not to have to carry around €50 notes. This reflects tight consumer budgets and security concerns. I believe there is a considerable convenience element for consumers, particularly pensioners and those on low incomes in being able to access smaller value notes. It is also unfair on traders if consumers, who wish to use cash for small purchases, are forced to hand over a €50 note every time.”

Under the National Payments Plan, banks were due to achieve a target of 5% of all notes by volume distributed from non-retailer ATMs to be €10 notes from Q3 2014. According to the Central Bank, these targets are being met but there is considerable doubt among consumers that this is being consistently met in practice.

Here at TheCork.ie office we cannot remember the last time we got a €10 note at an ATM machine, and we never were able to withdraw €5… ever!

“There is an onus on the banks and the Central Bank to demonstrate that these targets actually being implemented and, to go further, and significantly increase the targets. The issue has being brought in to sharper focus lately with the announcement from Bank of Ireland that it is placing restrictions on in branch cash transactions. We know the banks will do what’s best for them, not necessarily what is most convenient for their customers. I believe the banks should also look at capping ATM withdrawal charges for people on low incomes who need to access small amounts of cash on a regular basis.”