A newly refurbished emergency room has been opened at Cork University Maternity Hospital (CUMH). The new unit has individual, walled cubicles to allow privacy and dignity to patients as they are being assessed, examined, investigated and/or admitted.

The emergency room (ER) at CUMH is a 24-hour service, and is the first point of access for the majority of women using the services of CUMH. In this department, staff regularly encounter women experiencing stillbirth or miscarriage and meet very ill women with a range of gynaecological problems. This is the only maternity hospital in Cork city and county, and there are over 17,000 women per annum seen in the ER. CUMH is also the regional centre for women’s cancer services, and women may present with advanced cancer or with complications of treatment for admission through the ER.

The refurbishment project aimed to create private space and give dignity to all those attending the ER, through the creation of separate walled cubicles. The staff workstation was also improved so that staff can now view the entire facility from their base, with this set back from the rooms to allow for presentations or hand-over of care.

The first mum to be seen in the newly refurbished emergency room was Lena O’Regan from Rosscarbery, Co Cork. According to Lena “I spent a lot of time in the room before my first son Mathew was born as there were complications in the early part of my pregnancy. When I came into the newly refurbished room before my second son Harry was born I was blown away by the difference. It’s a much brighter, happier and relaxed environment and is a much more private space to be treated in particularly if you are hearing bad news. The artwork on the doors is amazing.”

“We are delighted with the completed refurbishment, which will ensure a private and comfortable space for each woman to be assessed, examined and cared for. The new design is a very positive development for patients at CUMH, as we strive at all times to ensure a culture of dignity and respect for both patients and staff. We are extremely grateful to artist Declan O’Mahony for the artworks incorporated in the sliding door panels and to Féileacáin for sponsoring their production costs.”

Through careful use of space, artwork and lighting, separate walled cubicles were created. Original decorative door finishes were individualised for each room space by local artist Declan O’Mahony.

According to Mr O’Mahony “My priority was intimacy. Maximising a very tight space with sliding doors was achieved by integrating the artwork in the door panels.

“These needed to create a positive and uplifting yet calming atmosphere. Each organic floating form was hand drawn then hand cut and painted. The colour combinations developed intuitively as the pieces grew. They were then re-assembled and fixed to a translucent backing sheet. I insisted on lightness and wanted to create a whisper-like floating effect with harmonious colours.

“I decided to have two richly coloured and two lighter softer pieces and then place them opposite each other for emphasis. Peoples’ colour perception is so diverse that I felt a contrast would work best and give more certainty to the overall design.” 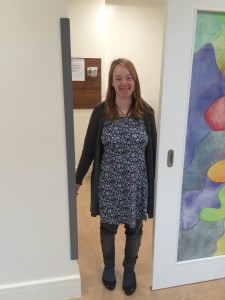