This December the Men’s Cancer Alliance and the Mercy Hospital Foundation are asking men from all across Munster to grow their beard, raise funds and help beat bowel cancer. Decembeard, Ireland’s newest and hairiest fundraiser encouraging men of all ages to grow a beard and raise funds during December to support the diagnosis and treatment of bowel cancer nationwide, was officially launched in Munster in The Grafton Barber on French Church Street, Cork City.

Bowel cancer (also known as colorectal cancer) is the second most common cancer in men, with one in ten men likely to be diagnosed with the disease by age 85. With bowel cancer projected to increase by over 120% by 2040, and almost 2,500 new cases of bowel cancer diagnosed each year, now is the time to raise funds and awareness, and really make a difference. In 90% of cases, if diagnosed early, bowel cancer can be successfully treated.

Decembeard encourages men to ditch their razors and grow a beard in the run up to the festive season, embracing this initiative along with the main man himself, Mr Claus, who sports one of the most famous beards in the world, and raise much needed funds by seeking sponsorship from friends and family. Any money raised locally, stays local and funds raised by Munster registrants will stay at The Mercy Hospital and help bowel cancer patients and their families there.

Micheál Sheridan, CEO at the Mercy Hospital Foundation and spokesperson for MCA says: “No man should die unnecessarily from cancer, and initiatives like Decembeard create a platform for men to discuss these topics and hopefully encourage them to visit their GP when they feel something is not right. This campaign is about raising funds but it’s also about raising awareness – so I’m encouraging men of all ages all across Munster, and indeed Ireland, to ditch the razors for the month of December and start talking about men’s health with friends and family.”

The Men’s Cancer Alliance (MCA), the charity behind Blue September, is an umbrella alliance, formed by the Mercy Hospital Foundation, The Mater Foundation, and Cancer Care West charities. Their aim is to create awareness about men’s cancers, treatments and supports available to men and to raise vital funds to ensure that men right across Ireland have access to the most up to date facilities, treatments and support services to help them on their cancer journey.

Decembeard is asking Irish men to take on this hairy initiative, so whether you’re planning on emulating Santa Claus and Gandalf, or George Clooney and Brad Pitt, register today at www.menscancer.ie. Follow all the latest hairy updates using the hashtag #Decembeard. 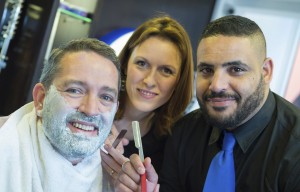