An extensive programme of events across the seven programme strands of the Ireland 2016 Centenary Programme was launched during the week by Cork City Lord Mayor Cllr. Chris O’ Leary. 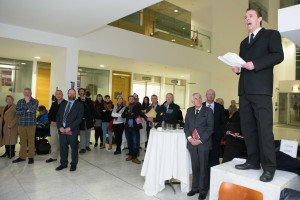 Michael Sands performing a piece from Road to The Rising at the Cork City 2016 Programme Launch in the Atrium of the New Civic Buildings, Cork City Council.
PIC DARRAGH KANE

The Cork City programme is the outcome of consultations with interested local groups, organisations and individuals, who were invited to participate in the planning and implementation of the local programme. Led by Cork City Council and under the guidance of the local 1916 co-ordinator, the programmes contain events and initiatives ranging across all seven strands of the Ireland 2016 programme.

The 31 Local Authority Programmes for Ireland 2016 represent the outcome of many hundreds of hours of reflection, consultation and discussion involving thousands of people all over Ireland.

Some of the events planned for Cork City include:

· Easter Monday Commemorative Ceremony to mark the 100th anniversary of the Rising in conjunction with Cork County Council. Events will be held at St. Francis Hall on Sheares Street, the home of the Cork Volunteers, and at the National Monument on Grand Parade. A synchronised wreath laying ceremony will be held at 1.15 p.m. – the time that the first shots of the 1916 Rising were fired.

· Exhibition: Perceptions 2016, the Art of Citizenship: Part of a series of exhibitions and events the Crawford Art Gallery will host in response to the 1916 Centenary, Perceptions 2016 is an exhibition, seminar and public engagement workshops and events that broaden the range of voices, visions, perceptions and approaches to creativity that the public engage with. This will be held in cultural venues throughout the City including Crawford Art Gallery, Wandesford Quay Gallery, City Hall Atrium and a number of satellite venues around Cork.

· Exhibition on the 1916 rising and its connection to Cork City Illustrating people, places and events connected to Easter Week in Cork at Cork Public Museum.

Cork City Council will manage a year round venue based programme in St Peter’s Church on North Main Street. The centre will be called ‘The Centre of Commemoration’ and will host a range of exhibitions, talks, readings, music and community events. All national themes relating to Remember, Reconcile, Imagine, Present And Celebrate will be programmed, supported and presented into this venue.

The above is a small sample of some of the highlights of the Cork City 2016 Programme. For the full comprehensive list of events, see www.corkcity1916.ie.

Speaking at the launch of the Cork City Plan, an Ardmhéara, Cllr. Chris O’ Leary said:

“2016 is an opportunity to celebrate the extraordinary sacrifice of so many who put the future of Ireland before their own personal well-being – it is also an opportunity for us to reflect on almost 100 years of independence and what we have done with that hard won gift. Today’s Ireland demands to be measured against the vision of those who gave their lives to create it.

And Cork was an important part of that struggle. Whilst no actual fighting took place in Cork, many hundreds of Cork men and women mobilised and were clearly prepared to pay the ultimate price for their country’s freedom. A tense standoff occurred at the Volunteer Hall on Sheares Street between the Irish Volunteers who had assembled there and the British Forces. The intervention of the Lord Mayor and the Bishop of the day led to a peaceful outcome and no bloodshed. This marked the commencement of an extraordinary chapter in Cork’s history, where it would not be found wanting when the call arms in the name of an independent Ireland was made. The names of McSwiney, McCurtain, Barry, Collins and so many others bear testament to that courageous commitment.

I am particularly proud of the comprehensive programme which has been put together by the City Council’s TEAM unit to commemorate the legacy of 1916 and beyond and I look forward very much to being part of what promises to be a most memorable year. Go néirí go brea linn”.