At an event to recognise outstanding young leaders in the rural youth organisation, Macra na Feirme, two Cork members were awarded a National Leadership Award. The announcement was made last night, Tuesday, the 2nd February, at a special reception in the Irish Farm Centre in Dublin.

The other finalists are:

Macra na Feirme National President, Seán Finan, said, “Congratulations to this year’s National Leadership Award winners. This competition recognises the hard work and commitment of our young leaders who play a major role in our organisation and who often go on to hold positions in other national organisations. Dating back to 1982, previous winners of the competition include current Government ministers and business leaders.”

The National Leadership Awards recognise the leadership skills of Macra members within their clubs and the wider community. The competition raises the level and standard of leadership in Macra and provides an incentive for the development of club programmes.

This year’s six finalists were judged by a panel including Peter Byrne, CEO of FRS Network; Mary Cunningham, Director of the National Youth Council of Ireland (NYCI); and Neil Keane, President of the Agricultural Science Association (ASA).

The three winners were presented with specially commissioned commemorative trophies and will represent Macra on various international travel opportunities in 2016. 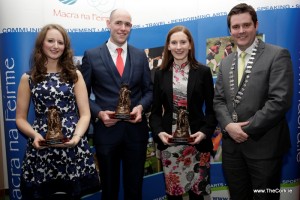