Ninety five year old Michael Minehane, one of the first members of the Credit Union helped to launch the 50th celebrations with his daughter Anne and granddaughter Abbie Salter-Townshend as well as one of its newest members, three year old Micheál McCarthy. Michael became a member on Saturday 26th February 1966 and has been a weekly visitor since opening hours were from 7-9.30pm in the Town Hall every Saturday. Michael has kept all of his twenty five past Credit Union books and has an archive of pictures of the Credit Union since its early days.

From Monday 22nd to Saturday 27th February, Skibbereen Credit Union will match deposits up to €50 for the first 50 new members to open an account as well as offering special gifts to anyone taking a loan that week. Red fm will also broadcast from the banking hall from 12-3pm on Friday 26th with special giveaways and prizes throughout the day.

Speaking of the 50th birthday celebrations, Donal O’Driscoll, Manager, said “Skibbereen Credit Union offers an incredibly important service to our members. In 1966 the need for the local community to take ownership of their financial future was incredibly strong and this is still the case today. Our mission has remained the same over the past 50 years – to give members more control over their own finances. This core principle of putting people before profit has stood the test of time and we are extremely proud to be celebrating our 50th year in the community and very much look forward to expanding our services and building on this for many more years to come.” 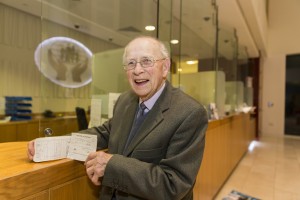 Pictured at Skibbereen Credit Union this week to help celebrate it’s 50th birthday was Ninety five year old Michael Minehane, one of the first members of the Credit Union.
Photograph by: Emma Jervis

Cork Institute of Technology student in final sixteen of cook off competition
Previous Post
Exhibition: The Real Songs of 1916 and The War of Independence