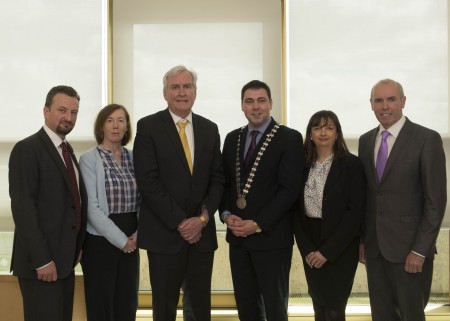 On June 23rd 1985, 329 passengers and crew lost their lives when a bomb detonated aboard an Air India Flight, en route from Toronto to Bombay. Cork County Council erected a shrine and memorial garden to the victims of this atrocity on the peninsula of Muintir Bhaire, an Irish place name that translates to ‘Close to God’. The site also looks directly out to the Atlantic Ocean, 165 miles to the point where the plane went down.

Mayor of the County of Cork, Cllr John Paul O’Shea “It was an honour to meet Canadian Ambassador, Kevin Vickers today and on behalf of the people of Cork, I want to thank him and the Canadian government for this kind donation. I would like to again extend my sympathies to the victims’ families of this atrocity. Cork County Council, together with the people of West Cork, is privileged to maintain this memorial which offers a warm welcome for those who visit to pay their respects”.

Canadian Ambassador, Kevin Vickers “It was a privilege to meet Mayor John Paul O’Shea and his officials to express once again the profound appreciation of the Canadian people to the people of Cork for their ongoing commitment in maintaining the Ahakista memorial site.”

A memorial service is held every year at Muintir Bhaire as commemoration for the families who come to remember their lost loved ones. Mayor O’ Shea added “I know that time does not lessen the pain of such a tragic loss. People have travelled from all over the world to this permanent memorial and many strong friendships have been forged and are strengthened every year. The memorial provides a place of tranquillity and reflection for visitors to the area and this incredibly kind donation from the Canadian Government to assist in the maintenance of this memorial place is very much appreciated.”