Local Cork cancer survivor, Joanie Hanley, has raised €21,000 to date and counting in her fundraising fight against cancer. 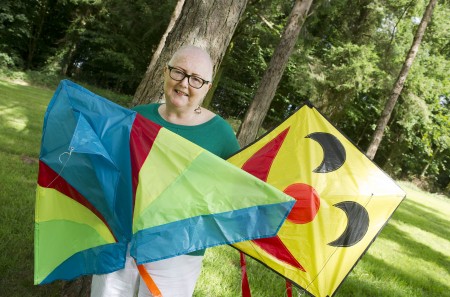 Cancer Survivor, Joanie Hanley, has raised €21,000 to date and counting for cancer research through her fundraising events such as Kitefest. The fourth annual Kitefest will take place on Father’s Day, Sunday, 19 June, at Millstreet Country Park from 1pm to 5pm.

Joanie Hanley, Fermoy-based mother of five and grandmother of four, practiced as a nurse in Cork until she was diagnosed with breast cancer in 2013. During her treatment, Joanie wanted to help others in similar positions and since her recovery she has dedicated herself to raising critical funds for Breakthrough Cancer Research and other cancer charities. She has organised a number of events throughout Cork, including the annual Kitefest which takes place every June, and Brave Men Walking, a fashion show featuring the courageous members of Cork’s Emergency Service crews.

Speaking about her inspiration for the Kitefest, Joanie states, “As a cancer survivor, I wanted to come up with a way to support cancer research, I knew a marathon was out for me, so I came up with this idea because during my treatment, when I needed a boost, I could go out into the fresh air, fly my kite, look up and feel a sense of hope for the future. I want to share that feeling with others and in doing so help to raise money for such a worthy charity Breakthrough Cancer Research.”

Fundraising Director of Breakthrough Cancer Research, Orla Dolan, is blown away by Joanie’s commitment to fundraising stating, “We are delighted to have Joanie raising funds for cancer research in Cork. Over the past four years, Joanie has raised over €21,000, an astonishing amount of money which has gone towards our research into poor prognosis cancers to help patients like Joanie. Joanie’s upcoming event, Kitefest, perfectly represents Joanie and her infectious energy; it will be an exciting and fun filled day for all the family with non- stop entertainment.”

The fourth annual Kitefest will take place on Father’s Day, Sunday, 19 June, at Millstreet Country Park from 1pm to 5pm. All proceeds from the €20.00 per car entrance fee will be donated directly to Breakthrough Cancer Research. The public are invited to bring their own kites on the day.