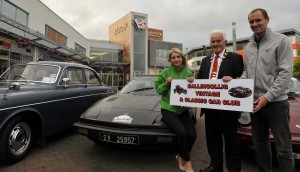 The two day event will see the popular club, which caters for classic car owners in the Ballincollig and surrounding areas including Cork City, welcome classic cars from all different vintage districts, competing for prizes and the title of Oldest Car, Car of the Show, Longest Travelled, Best Car Club, Best Non-Club Car, Best Motorbike, and Best Tractor.

As a prelude to the festival, a vintage bicycle run will take place at 8pm this Friday 22nd July which will be followed by music and entertainment.

Registration opens at 11am on Saturday, with a parade of cars at 12pm, and the official opening at 2pm.

On Sunday, registration opens at 1pm followed by a dog show at 3pm; with the prize giving scheduled for 4.30pm.

Kevin McSweeney, Chairman of Ballincollig & District Vintage and Classic Car Club said “Our annual two day event is always an extremely popular one, with impressive displays of vintage vehicles – both two and four wheeled or all sizes. It’s a great family friendly event with music and entertainment every day, as well as face painters and clowns, so we’re encouraging people to come along and join the fun, and help us support the the Mick McEvoy Branch of the Organisation of National Ex-Servicemen and Women.”

Over 10,000 people rescued in the Mediterranean by the Irish Naval Service
Previous Post
New Baby Tapir at Fota Wildlife Park Needs a Name