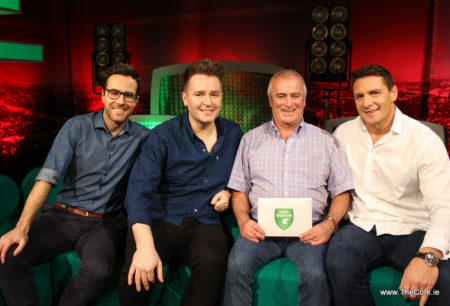 Ian Collins was the delighted rugby fan who won an all-expenses paid trip to Edinburgh for the Champions Cup final in May. He won the prize live on TV3’s ‘Clubhouse’ show last Tuesday, February 21st, as comedian Jarlath Regan proved to be Ian’s lucky charm when he took on former Munster and Ireland star David Wallace on air. In a battle of highest score wins on a reaction test called ‘Clubhouse Challenge’, Regan proved that, despite never being a professional athlete, his reactions are sharper than many ex-Ireland internationals, including Wallace.

Speaking about his big win, Collins, from Douglas, Cork, remarked, “I played rugby for 20 years in Germany but still kept up my support for Munster – it would be something else if they made it to Edinburgh in May. My son got the tickets to ‘Clubhouse’ and he took myself and my wife, so there’s a battle on to see who comes to Edinburgh, but I reckon my wife will be on the plane!”

The competition is sponsored by Heineken Rugby Club and gives two members of the audience the chance to win a trip to the Champions Cup final each week. Heineken Rugby Club wants rugby fans to get more from the game and its members receive exclusive benefits such as match tickets, exclusive event invites, always-on discounts across some of Ireland’s top brands and lots more.