Cork City FC go into tonights game with four wins from four league games, thanks to a 2-1 win over Sligo Rovers at Turner’s Cross on Monday night. The home side, meanwhile, have two wins and two defeats from their opening four fixtures; they recorded a 2-1 win away to Galway United on Monday night.

Last season, the sides met on four occasions, with City having the better of those encounters. City recorded two wins in September (5-0 away in the FAI Cup and 3-0 at home in the league), along with a 2-0 win at Turner’s Cross in April, while the sides drew 0-0 in Tallaght in June.

Speaking ahead of the game, City boss John Caulfield said: “The league hasn’t even really started yet, so for us it is just about performing every week. Tomorrow we are playing a team that feel they can win the league, so it is going to be a big challenge for us. What we have to do is focus on each match; we see ourselves as one of the challengers and we want to be there at the end of the season.” 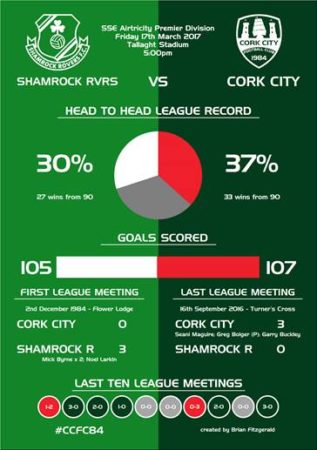 “It is about us performing well; we know the threats that Rovers have but it is really about us making sure we can perform at a high level. It’s all about tomorrow and us preparing properly, which is what we have been doing since the start of the season.”

“The pressure comes from ourselves, because we want to win. We are doing everything we can to win. We did well in Europe last year and we won the cup, and I believe that this team is an even better team than last year’s. It is a team that will create chances and score goals.”

“The quality of the top teams in this league is good, but at the same time the bottom team can beat you if you’re not ready.”

Caulfield may have to plan for the game without the services of Greg Bolger, who picked up an ankle injury against Sligo Rovers on Monday night and is considered very doubtful. On the plus side, John Kavanagh, Alan Bennett and Stephen Dooley are all back in contention.