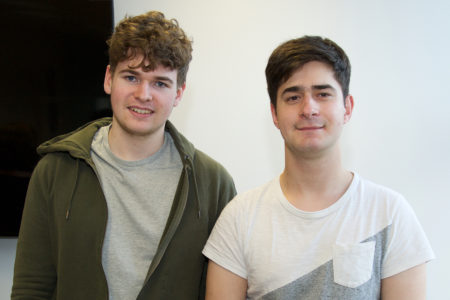 Sam Punch and Ger O’Donovan, first year BIS students, pictured at the cheque presentation by first year Business Information Systems (BIS) students in UCC to St. Vincent de Paul.
The students raised €2,230 through the sale of a CD of Christmas carols they recorded, with all proceeds go towards the St. Vincent de Paul education fund.

A collaborative project undertaken by a group of 23 first year Business Information Students (BIS) in UCC has raised €2,230 for the Society of St. Vincent de Paul in Cork.

The first year students undertook a group project to create a charity CD of Christmas carols that saw them come together to brainstorm, rehearse, collaborate, and record the album, and once complete, sell it to raise funds for the much loved charity. This fundraising initiative has been running for a number of years as part of the BIS programme, and each year the students decide who the beneficiary will be.

The money raised by this project will go specifically towards the Society of St. Vincent de Paul’s Education Fund, which recognises the importance of further education particularly for people who live in disadvantaged circumstances. The Education Fund has been put in place to help those people, and give them a “hand up, not a hand out” according to Maeve O’Reilly, a member of the Society of Saint Vincent de Paul’s Education committee.

Funds raised were presented by the students to representatives from the Cork conference of the Society of St. Vincent de Paul, as well as committee members from UCC’s St. Vincent de Paul Society (UCC SVP), the oldest charitable society in UCC at a reception in UCC’s Business Information Systems on March 16th.

Speaking at the presentation of funds, Maeve O’Reilly continued “The best investment students can make is the investment in themselves and their future, and that is where St. Vincent de Paul’s Education Fund can assist. The Education Fund is available to undergraduate students and those in colleges of further education; and we deal with applications on an individual basis once other funding avenues have been explored. We can offer support and advice in terms of tuition fees, sustenance, and other unexpected expenses due to circumstances such as bereavement, to help students continue their third level education.”

Brendan O’Neill, Chair of the Fundraising Committee at the Society of Saint Vincent de Paul, Cork echoed Maeve’s words and thanked the first year BIS students involved in the production of the CD. He also acknowledged the UCC SVP Society and their work which sees them organise weekly voluntary activities throughout Cork helping those in need.

Speaking at the launch Professor Ciaran Murphy, Head of BIS at UCC said “From the time they enter first year in UCC, we encourage our students to invest in themselves, but in that, not forget the needs of others – and their understanding of this is clearly evident in this project. These students had the initiative and drive to record the CD, and then sell it, and themselves selected the Society of Saint Vincent de Paul as the beneficiary, and for this I commend them.”

First year student Donnacha Murphy chaired the coordination of recording and production of the album, and speaking on behalf of his fellow students at the cheque presentation he said “This project saw the students involved learn a lot of new skills, both in terms of skills that are transferable to our course, but also on a personal level, so it was a great learning experience, and for many of us, the highlight of our first year in BIS.”