The legendary Munster and Irish second row forward, Donncha O’Callaghan has been announced as May’s ‘Cork Person of the Month’.

Donncha’s love of sport, and specifically rugby, started during his school days in Cork at Christian Brothers’ College and later at Highfield Rugby Club. Such was his talent on the field of play that he quickly progressed to a glittering career with Munster, Ireland, the British and Irish Lions, and the Barbarians.

Throughout his extensive rugby career, he has won U-19 World Championships, Heineken Cups, Celtic Leagues, Triple Crowns and Six Nations Championships, picking up a record number of caps for Munster and Ireland in the process. He crossed the Irish Sea to the UK in more recent times, joining English Aviva Premiership Club, Worcester Warriors.

“Donncha O’Callaghan is a remarkable sportsman, and importantly, is a fantastic ambassador for Cork”, said ‘Cork Person of the Year’ awards founder, Manus O’Callaghan. “His involvement with Munster and Ireland teams over the years marks some of the most memorable events in the history of Irish rugby and his commitment to his sporting career is matched only by his sense of humour, his humility and his social conscience through his extraordinary work with UNICEF. He is a most worthy recipient of the ‘Cork Person of the Month’ award”.

Well known for his work ethic, combined with a mischievous sense of fun, Donncha has endeared himself to thousands of sports fans throughout Ireland and beyond. A passionate ambassador for his native Cork throughout his playing career, Donncha’s keen sense of social justice is evidenced by his work with UNICEF, joining the international children’s organization as a Goodwill Ambassador in 2009. Since that time, he has made visits to South Africa, Haiti, Zimbabwe and Nigeria, and has been awarded a ‘Contribution to Society Award’ for his work with UNICEF. As winner of the May monthly award, Donncha O’Callaghan’s name will go forward, with the other monthly winners, for possible selection as ‘Cork Person of the Year 2017’. The overall winner will be unveiled at a Gala Awards Lunch in mid January 2018.

“In recent weeks Donncha has been named Player of the Season at Worcester Warriors and now also wears the Captain’s armband. His great experience of winning 94 International Caps, Lions Tours in 2005 and 2009, two Heineken Cups, three Celtic Leagues and 268 appearances with Munster and he now continues to make sporting history with his new club ” added Manus O’Callaghan. 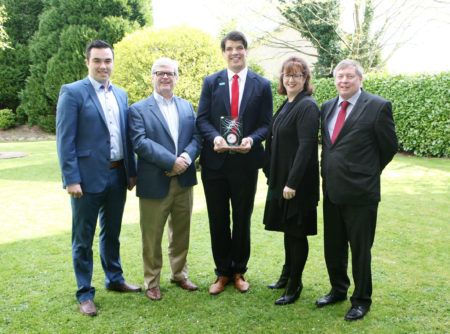