Many students of History will have heard that during the Irish Famine a tribe of Native Americans (previously referred to as ‘Indians’, a word that is now considered incorrect) donated food to the Irish people.

The Choctaw Nation of Native Americans were today remembered with the dedication of a commemorative sculpture in East Cork.

A delegation from the USA, including their current chief, traveled to Midleton for an unveiling ceremony this afternoon. 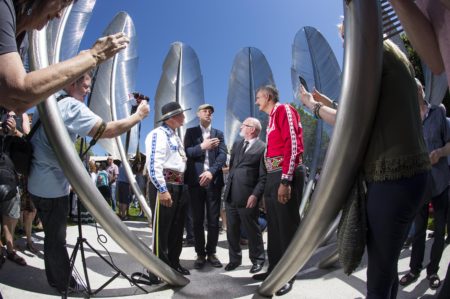 At the height of the famine, in 1847, the Choctaw Nation gathered raised 170 US Dollars for the Irish. This figure would be tens of thousands of dollars today, adjusted for inflation).

The Choctaw people empathised with Ireland’s famine victims. Just 16 years earlier, the US government had forcibly removed them from their historic lands, and moved them to designated parts of south-east Oklahoma. In what became known as the Trail of Tears, thousands of people walked more than 1,000 miles without their possessions. 4,000 people died of hunger, cold and disease.

Today, 170 years later, a sculpture entitled ‘Kindred Spirits’ was unveiled. It is made of nine stainless steel formed eagle feathers reaching seven metres towards the sky, to represent a bowl of food for the hungry.

The sculpture was commissioned in 2013 by the then Midleton Town Council. All Town Councils were abolished in Ireland in 2014 but the work continued.