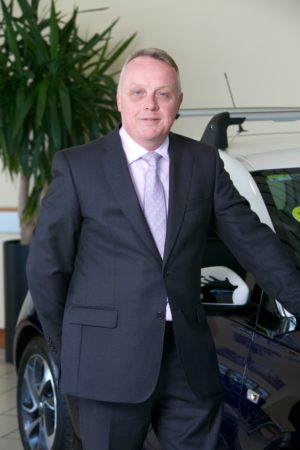 Johnson & Perrott has today confirmed that it is to invest up to €15 million to build a new dealership cluster for their Cork City based Motor Dealership Division, creating a minimum of 30 new jobs. This is the most significant investment in the motor industry in Cork for ten years and is evidence of the marked recovery in the economy and in motor vehicle sales since 2013.

Currently based at Mahon Point Retail Park and Douglas Road in Cork, with a total of seven car franchises, Johnson & Perrott has acquired 4.3 acres of land on the Bandon Road in Bishopstown, the site of the previous Uponor factory which closed in 2003.

The company have confirmed that they will start construction on a new 14 car showroom, together with a dedicated new car handover area and state of the art workshop facilities for its dual Jaguar Land Rover franchise, immediately followed by an 8 car showroom and workshop facilities for its Volvo franchise. “The phenomenal success of our premium franchises over the past four years has meant that our existing facility at Mahon Point is no longer big enough to cater for the developing needs of these three marques” according to Mark Whitaker, Chief Executive of Johnson & Perrott Motor Group. “Both Jaguar Land Rover and Volvo have developed new building designs and standards to deliver a premium customer experience and each of the facilities built in Bishopstown will represent both the largest and finest in the country when completed” he added.

The group, established in 1810 as a carriage manufacturer, also has very successful fleet management and vehicle rental divisions and in accounts soon to be published recorded a turnover of €88 million for 2016 and a 7% rise in pre-tax profits for the period to €5.026 million.

Johnson & Perrott have confirmed that when the new facilities are opened in April of 2018, the existing facilities in Mahon Point and Douglas will be reconfigured to offer the widest choice of franchises available in Cork City across three retail sites. Johnson & Perrott currently represents Honda, Kia, Peugeot and Opel in addition to Jaguar Land Rover and Volvo. “Discussions are ongoing with both existing franchise partners and new potential partners to develop new offerings, and we look forward to announcing our full line-up of brands as our plans develop over the coming months” Mr Whitaker confirmed.

Infrastructure to support the expected new ranges of electric and electric hybrid vehicles from both franchises is also being incorporated. Jaguar plans to launch the first of its electric vehicles, the I-Pace in 2018 and Volvo has now committed that all new models launched after 2019 will be either electric or electric hybrid.

“This very substantial investment by the company in the new facility in Bishopstown underscores our shareholders’ confidence in the Cork economy, the quickly evolving motor industry and in the wonderful team of people who work in our organisation each day. Our ambition is to lead the industry in Cork City and County by delivering excellent products and service and our new site will position us at both ends of the South City ring road” Mr Whitaker added.

PROPERTY: Sale of former mother and baby home – Bessboro – must be halted says Cork MEP
Previous Post
FARM SAFETY: Farms are a workplace, not a playground – says Cork Senator (who is also a Farmer)