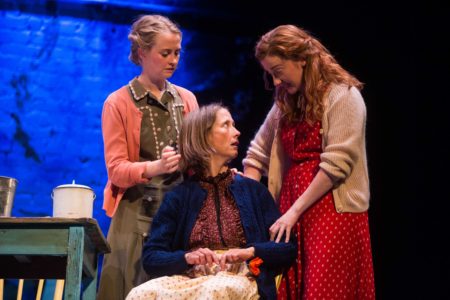 Since it opened on August 2nd, the Everyman production of the Brian Friel masterpiece, “Dancing at Lughnasa” has been attracting large, and very appreciative, audiences. Continuing in its tradition of bringing top quality drama to Cork, director, Julie Kelleher has, once again, produced a winner,”I’m so thrilled both as director of the show, and artistic director of the venue, that audiences have responded so positively to “Dancing at Lughnasa.” We’ve got just five performances left. It’s the longest summer run we’ve done in a long time, and we’re so heartened by the support that audiences have shown our production of this timeless classic.”

“Dancing at Lughnasa” tells the story of the five Mundy sisters, living in rural Donegal in the 1930s. Their lives are affected by events outside their control and their struggle to survive is told poignantly and effectively. Designer, Deirdre Dwyer, has managed with great skill, to convey the setting, and all of the ensemble perform their roles with conviction.

“A brilliant night’s theatre” said audience member Niall Kiely after Saturday night’s performance “I saw the original Abbey production back in the early 1990s and this production is as good, if not better, than that.”

“Dancing at Lughnasa” is at the Everyman until Saturday night next, August 26th and tickets are available on 021 4501673 or www.everymancork.com. Please note the early start time of 7.30pm.